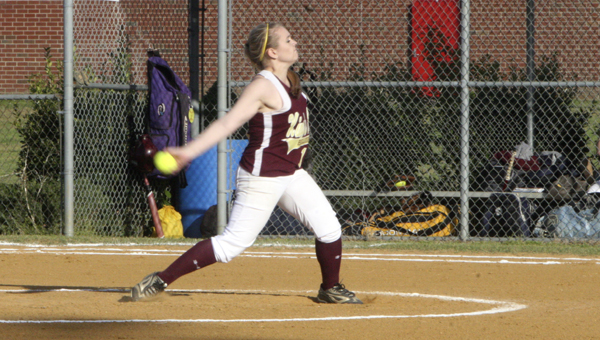 The first three times a pair of Suffolk schools met on a softball field this season, the outcome was a one-run game.

King’s Fork made sure such last at-bat drama wasn’t needed at all Thursday evening at Nansemond River. The Lady Bulldogs (8-3, 7-3) scored three runs in the first inning and rolled to a 10-0 win and a regular-season sweep over NR (6-5, 5-5).

Chelsea Holecek fired a three-hit complete game for the Lady Bulldogs. Holecek had a no-hitter bid going until one out in the NR sixth. 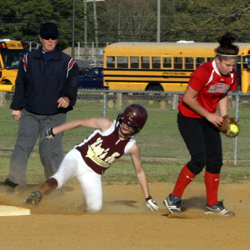 She kept the Lady Warriors, who’ve been posting plenty of offense against most district opponents, off balance and was able to rely on her defense. Holecek struck out one and walked one.

At the plate, Megan Blythe led KF going 4-for-4 with a sacrifice fly, four RBI and two runs.

On NR‘s baseball diamond, the result was a season sweep for the home side. Nansemond River (7-3) finished a 3-0 week in the Southeastern District with a 9-3 win over King’s Fork (2-8).

The Bulldogs actually held the Warrior offense better than NR’s previous opponents this week, but a couple big rallies were plenty of offense as starting pitcher Tyler Brown (3-1) held the Bulldogs scoreless for five innings.

The Lady Bulldogs put their first three hitters on and all three came around to score. Autumn Vick walked. After Vick swiped second, Blythe singled sharply to right and the ball skipped by the NR outfielder all the way to the 230-foot fence, allowing Blythe to circle the bases.

The Lady Bulldogs kept smacking hits all around the yard and came close to more runs in the first inning. The Lady Warriors, with Sydney Glover doing the pitching, worked around Kristin Moore’s leadoff double in the third to keep the score 3-0.

In the KF fourth, Blythe singled to drive in Ashley Roten from second to make it 4-0. With two Lady Bulldogs on, Delucia lined out into a double play to shortstop Alex Keiser. Again, though, KF was a shade from a bigger inning.

KF finished with five in the frame and a 9-0 lead. Holecek’s effort at a no-hitter was the main question remaining and Glover, NR’s leadoff hitter, broke it up with five outs to go.

Moore, Cuevas, Davis and Raynor finished with two hits each. Vick was 1-for-2 with three walks.

Nansemond River plated three runs in the first inning on the baseball diamond and, as the Warriors have done all week, kept hitting even more from there.

Josh Howard scored, stealing home while Brandon Lowe was thrown out trying to steal second, to make it 4-0 NR in the third.

The Warriors worked a double steal play again to spark the big rally a couple innings later. This time, Lowe raced in from third as Kyle Moore was safe at second, making it 5-0.

Travis Johnson’s single drove in Moore. Ryan O’Hara’s sacrifice fly scored two runs, bringing in Johnson from third plus Hayden Champigny thanks to a Bulldog error. An RBI double by Howard, plating Blake Eure, was the last tally of the inning and good for a 9-0 lead.

The Bulldogs got on the board in the sixth. Nick Ramos singled to lead off the inning and wound up scoring on George Riddick’s sacrifice fly. Noah Johnson was 2-for-4 with two doubles and a run for the Bulldogs.

Brown allowed five hits and no walks in 5.0 innings. Howard, Lowe, Moore and Champigny had two hits each.