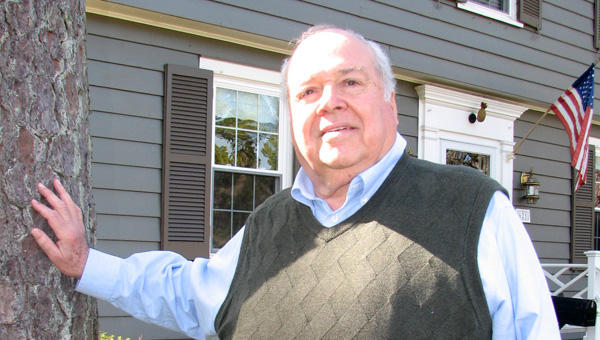 A program and reception was held at the Suffolk Center for Cultural Arts to honor the 2011 winner of the prestigious award. Proceeds from ticket sales to the event benefit Rotary charities. 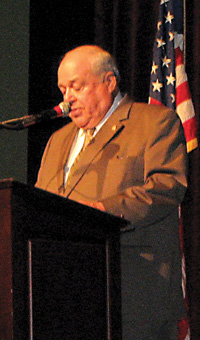 Quayle: Senator Frederick M. Quayle thanked his family, the Suffolk and North Suffolk Rotary clubs and others during his acceptance speech at the Suffolk Center for Cultural Arts Thursday night.

Local business owners, members of City Council, the Quayle family and many others came out to support the longtime senator.

Suffolk Rotary President Jay Butler said in choosing the First Citizen, the clubs try to find a person who works to constantly make the city a better place.

A video chronicling Quayle’s personal and professional achievements preceded his acceptance of the award.

Quayle’s son Mac, who could not attend the reception, was featured in the video.

“You’ve always been First Citizen to me,” he said. “I can think of no one who deserves it more.”

Fellow Virginia Senator Louise Lucas said Quayle is a man who truly has the interests of the citizens he represents at heart.

Quayle’s longtime friend Carol Lynne Shotton introduced him, recalling memories about growing up together in Suffolk.

She said although Quayle has received numerous awards over the years, First Citizen is sure to be one he treasures most.

After a standing ovation, Quayle thanked everyone who had supported him throughout the years.

He thanked his wife, Brenda, for being his biggest supporter and harshest critic.

“She is my very best friend,” he said.

Quayle acknowledged the support of his four children, three of whom were present; his mentor, former Gov. Mills E. Godwin; Mary Korving, his legislative assistant of many years; and the Rotary clubs.

“I am indebted to the Suffolk and North Suffolk Rotary clubs for this program,” he said. “Thank you for this honor you have bestowed on me tonight.”

Quayle also said it has always been an honor to represent every citizen in his district.

“I hope that I’ve represented you in the way you wanted,” he said.

Born and raised in Suffolk, Quayle graduated from Suffolk High School in 1954. He attended the University of Virginia and received his law degree from the University of Richmond. For almost 40 years, Quayle practiced law in Hampton Roads.

Quayle, who says he has been interested in politics since high school, decided to run for the state senate in 1992, and he won.

Since then, he has represented the 13th district while remaining active with his family and his community.

Quayle is the 52nd First Citizen of Suffolk. Many previous recipients were in the crowd, honoring Quayle.

TowneBank: An artist’s rendering of an office building, one of three new TowneBank buildings being constructed in the Harbour View... read more