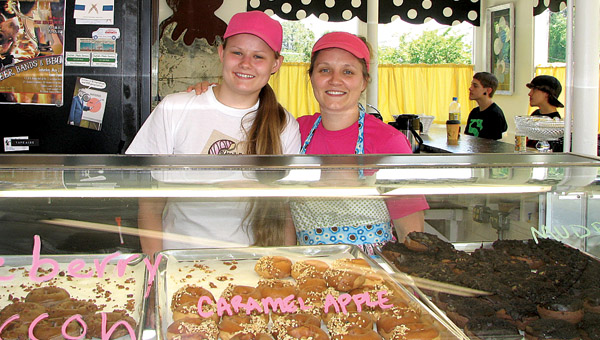 O’doodleDoo’s: Owner Reeva Luecke and associate Masha Register stand behind the counter at O’doodleDoo’s Donuts, which opened its doors Saturday. Luecke said customers will find flavors of donuts at the shop they can’t find anywhere else, like red velvet and PB&J.

These are not the flavors that most folks associate with donuts. They are, however, the specialties of a new donut shop in North Suffolk.

When Reeva Luecke decided to open a donut shop, she was tired of seeing the same old flavors at every other shop.

It’s not that she doesn’t like glazed donuts, but she also wanted to try out some new flavors at her shop.

“I’ve always wondered why can’t you get crazy flavors,” Luecke said. “I thought it would be so easy to make these flavors.”

So even though you can get a classic glazed donut at O’doodleDoo’s Donuts on Bridge Road, you might find it hard to walk out without something unusual in your box.

The store opened at 5 a.m. Saturday, Luecke said, and business was steady all day until it closed at noon.

Luecke said she likes being able to provide a product that people enjoy.

“Donuts make people happy,” she said. “Everybody likes them.”

Classic donut flavors in her store jockey for space with “hot mango madness” and “blueberry pancake and bacon.”

“We have some flavors you’re not going to see elsewhere,” Luecke said.

Luecke suggests customers try the red velvet donut, as it is one of her favorites and

will be an O’doodleDoo’s staple. But the menu is likely to be constantly changing, based on her customers’ tastes.

“We eat donuts all day long and test them out,” she said. “Anything you can dream up, we can make it into a donut.”

Luecke’s dream began three years ago. When her family moved to Suffolk, she said, she realized it was time to try to make that dream a reality, so she started looking for the perfect space.

“I think people want to buy local,” she said. “I think that’s what makes a community.”

Luecke, who has a background in food and beverage hospitality, wanted to open on Bridge Road because of the number of locally owned businesses that already call it home.

“It’s a hot spot for local businesses,” she said.

After several months, she found the perfect location, right across the street from her neighborhood — a building that was previously a Frosty Freeze.

At the time, she was working with Tulsa-based Daylight Donuts to open a franchise, but the company told her the building was too small to have a successful business.

Luecke said she was crushed, but she kept looking.

However, she couldn’t get the 50s-era building out of her mind.

“I like the style of the building,” she said. “I appreciate those old-style things.”

Even better for Luecke, the building’s landowner supported her mission to have a locally owned donut shop.

“He shares the vision,” she said. “I thought ‘I can’t trade that.’ I knew this was the place I needed to be.”

“Things that people appreciate being homemade can be independent,” she said. “There are things that you don’t have to slap a name on.”

To advertise opening day, Luecke has gone around to other businesses and neighborhoods, handing out donut samples and spreading the word about her shop.

She said she likes that local businesses are part of the character of a community, and she wanted the startup to have a personal touch.

“I believe to be local you have to stay local, which means I have to go out and shake hands and meet people,” she said. “I absolutely believe in that.”

The Suffolk Family YMCA will hold an Active Adult Day this week, specifically designed for to community members who are... read more