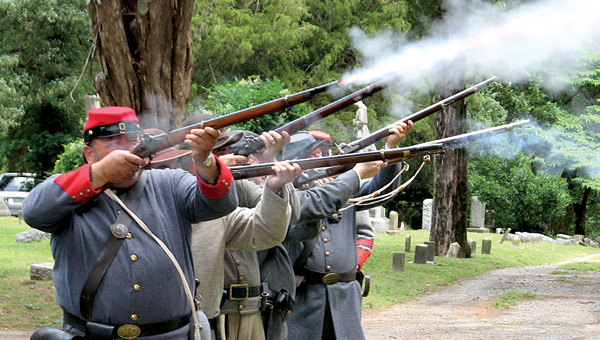 Salute: A team of Confederate re-enactors fires a volley of shots Saturday in Cedar Hill Cemetery during a Memorial Day ceremony hosted by the United Daughters of the Confederacy Suffolk chapter 173.

On Memorial Day weekend, the United Daughters of the Confederacy Suffolk chapter 173 came together to commemorate the sacrifices of the nation’s servicemen, particularly those who fought for the South during the American Civil War.

Ladies in period dress — some in full mourning, wearing all black — fanned themselves in the heat as uniformed re-enactors posted the colors, fired a volley of shots and played “Taps” on a bugle.

“Being here to honor our Confederate veterans is not only our privilege, it is our duty,” said Susan Carraway, president of the Suffolk chapter of the United Daughters of the Confederacy.

About 60 people attended the ceremony near the Confederate monument in Cedar Hill Cemetery. They were surrounded by thousands of graves, of which more than 200 hold Confederate soldiers.

“It’s not about having a long weekend,” said Frank Earnest, commander of the Army of Northern Virginia of Sons of Confederate Veterans. “The war we’re fighting today, we don’t pick up our arms. This war we have to fight with knowledge and truth.”

Earnest said Memorial Day began shortly after the Civil War ended, when Southern ladies were observed marking the graves of Confederate soldiers. Other groups decided to do the same thing, Earnest said.

“It’s a Confederate holiday,” he said. “That’s why I’m talking about education and truth.”

He urged those present not to allow people to say the Civil War was fought over slavery.

“That was not the case, but they use that as a weapon against us,” Earnest said. “You know what they fought for.”

The Confederate memorial played a role in the ceremony, as attendees were invited to place red and white carnations at the base of the memorial. The memorial was erected by Confederate 2nd Lt. Thomas Washington Smith, who is buried nearby.

The Tom Smith Camp of the Sons of Confederate Veterans also participated in the ceremony by placing a wreath at the base of the memorial.

More Memorial Day commemorations are scheduled for Monday, including one at 10 a.m. at the Albert G. Horton Jr. Memorial Veterans Cemetery and one at 11 a.m. at Cedar Hill Cemetery.