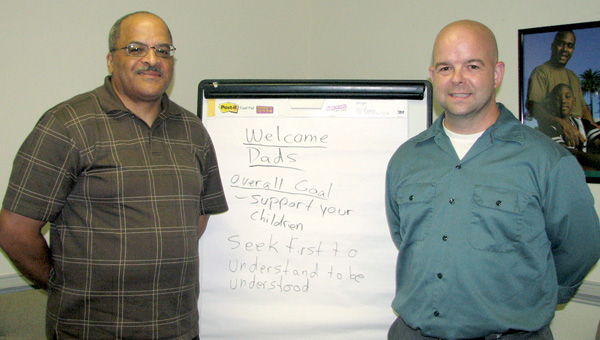 Fatherhood: Doug Taylor, left, and Craig Voigt lead a fatherhood program at the Up Center to help men become better parents. The group, which had its first session Thursday, discusses topics, such as communication, building relationships, being a good role model and managing anger, and how to use the lessons to better support their children.

When men get together to hang out, it usually isn’t to talk about relationships and building better communications.

But every Thursday at the Up Center on Clay Street, a group of men gather to do just that. For the next 13 weeks, the center is inviting men ages 16 to 40 to take part in its fatherhood program that guides the attendees in becoming better parents.

This is the third time the Up Center has offered the free program, and the group met for the first time Thursday.

Craig Voigt, a social worker, leads the program along with Doug Taylor, who has a degree in psychology.

Voigt said the men who attended Thursday showed a lot of courage by coming to the class.

He told them if every man who was having issues being a good father decided to do something about it, the room would be packed.

“We’re hoping this program has a ripple effect,” Voigt said.

Taylor said the main goal of the program is to help them better support their children.

When Voigt and Taylor asked why they attended, most of the fathers had the same reason: to be better a parent to their children.

Robert Perry, one of the men who attended the class, said his father had a hard time raising him because his father grew up without a dad.

“I guess that handicaps me a bit,” he said.

Now, Perry said he wants to break that cycle and build better relationships with his 5-year-old son and 3-month-old daughter.

Perry also hopes to work on his communication with his children and their mother.

Voigt said communication is a central theme in the program, and the most important thing men need to be is good fathers.

Taylor said he and Voigt have witnessed huge changes in the men who attend the program.

“We’ve had some very successful reports from guys,” Taylor said.

He said everything they teach is experienced-based and will produce results.

During the course of the program, the group will cover new topics every week, such as better parenting skills and the difference between men and women.

The discussions will offer the men guidance to be better fathers to their children and to improve their relationship with their children’s mother.

The group meets every Thursday at the Up Center from 6 to 7:30 p.m. The meetings are free and open to the public but require registration.

Pushing for the top