Robert Sandwich has prosecuted criminals in more than half the Commonwealth’s Attorney’s offices in Hampton Roads, but now he’s trying out the view from the other side of the courtroom. 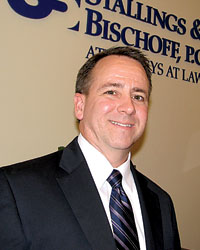 Bob Sandwich, a former prosecutor in the Suffolk Commonwealth’s Attorney’s office, recently switched employers to Stallings and Bischoff, a firm that does criminal defense work.

Sandwich recently moved from his desk in the office of Suffolk top prosecutor C. Phillips Ferguson across the street to the offices of Stallings & Bischoff, where he’ll do primarily criminal defense work.

“I felt like it was a good opportunity for me,” Sandwich said, explaining the somewhat unconventional move.

Sandwich said he got to help a lot of people in his role as a prosecutor, but there were always people he couldn’t help — people who needed help with divorces, civil litigation and more.

“I wanted to expand my ability to assist people in everyday things,” Sandwich said.

Sandwich was born in Atlanta and raised in southwest Georgia. He did a stint in the U.S. Navy, which first brought him to Hampton Roads, and graduated from University of Georgia law school.

After law school, he took the bar exam in Virginia, widely regarded as one of the hardest bar exams to pass.

“I kind of took that as a challenge,” he said.

He soon took a position at a personal injury firm in Richmond. He then served two years in Norfolk and two years in Portsmouth, both in the Commonwealth’s Attorney’s offices.

He then moved back to Georgia to help care for his ailing mother while working at a District Attorney’s office. After her death, he moved back to Virginia and got a job in the Virginia Beach prosecutor’s office in 2005. In 2007, he moved to the Suffolk office.

“Suffolk was by far my favorite place,” he said, adding that he had enjoyed “a really good working relationship” with all the attorneys in the office.

Ferguson gave him the opportunity to handle some of the most serious cases in the office, including assisting on a couple of murder cases — one of which had gone without an arrest for more than a decade.

But in the end, the Suffolk prosecutor’s office has a lot of experience, Sandwich said. To him, that meant little opportunity for advancement.

“It was a tough decision,” he said. “There were a lot of good people in that office.”

With his knowledge of how the office works, Sandwich believes he’ll be able to help his clients better than someone who has never worked there. He will mostly handle criminal defense, domestic relations, traffic court and civil litigation.

“Every case is different,” Sandwich said.