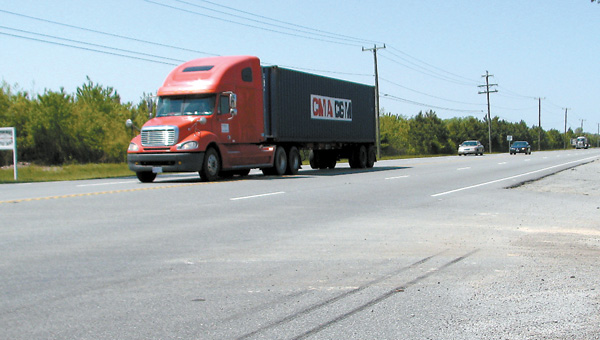 A container truck lumbers eastward on U.S. Route 460 in Suffolk, near the Isle of Wight County line, in this file photo. The state recently offered to pitch in for the cost of building the road.

The commonwealth of Virginia would contribute up to $500 million toward construction of a new Route 460 under a plan released by the Virginia Department of Transportation on Thursday.

Virginia’s commitment of public funds to the project would be intended to reduce the tolls that would be collected by whichever private company ended up with the contract to build and operate the new road, which would replace the current Route 460 from Suffolk to Petersburg.

In coordination with the Office of Transportation Public-Private Partnerships, VDOT moved the U.S. Route 460 Corridor Improvements Project ahead a step by asking for detailed proposals from the three multinational partnerships that had provided conceptual proposals for the project last year.

Cintra Infraestructuras S.A.U., 460 Partners Inc. and Multimodal Solutions submitted conceptual proposals that were approved for further development in March. The new instructions to those bidders call for them to provide their detailed proposals to the transportation agency by the first quarter of 2012.

The new instructions note that $500 million worth of funding for the project would come from the state in order “to facilitate the affordability of the project.” The rest of the cost, which the bidders estimated could rise to as much as $1.8 billion, would be paid through tolls and through the ability of the winning bidder to sell “naming rights” to various project assets.

The commitment of public funds could be an acknowledgement by the state of the negative public reaction that occurred when it was announced in March that the companies’ early proposals indicated tolls ranging from $5.50 to $11 for cars would be necessary if the entire project were funded without public money.

The Route 460 project has been an on-again, off-again item on the commonwealth’s transportation agenda for several years. But Gov. Bob McDonnell made the project a centerpiece of his campaign in 2009, and he has not relented in his support for it, despite the high price tags that have been attached to it.

“This project is a top priority of the commonwealth and will provide substantial benefits related to emergency evacuations and enhance the movement of freight to and from the ports,” VDOT Commissioner Greg Whirley said. “Additionally, the new Route 460 will provide greater connectivity between the Richmond/Petersburg and Hampton Roads regions, increasing economic development opportunities and job creation.”

The new road would be a 55-mile, four-lane, limited access highway with interchanges initially only at Route 58 in Suffolk and at I-295 in Prince George County. The earlier request for proposals gave companies the option of adding other interchanges in Isle of Wight, Southampton, Sussex and Prince George counties after the road had been operating for some time.

Suffolk police have charged a woman with felony assault on a police officer after she allegedly ran over his foot... read more