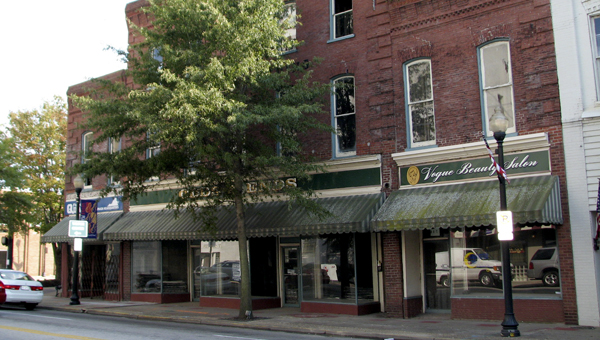 Monument Construction is renovating this building in the 100 block of West Washington Street, known as the Damiani Building because it used to be owned by former mayor Andy Damiani. The Economic Development Authority granted $30,000 on Wednesday to help with the renovation.

“We’re excited to work with them,” Kevin Hughes, director of economic development, said on Wednesday.

Two of the street-level business spaces will be converted to retail. The third will be a resident area as well as a leasing office for all of Monument Construction’s downtown projects.

The group also did renovations on East Point Plaza and 75 Commerce Street. Both of those projects were also old downtown buildings.

“This is a really important corner,” said Tom Dickey of Monument Construction. “It’s the corner of Main and Main. We’re excited about it.”

Work on the building began in July, as soon as City Council approved the project.

The façade grant approved on Wednesday will give $30,000 to help with the costs associated with the front of the building, including replacing glass windows and the awning.

The EDA’s façade grant program pays half the cost — up to $10,000 — of renovation projects that improve the curb appeal of buildings in the downtown business district and major corridors into town.

The Monument Construction project was able to receive $30,000 because there are actually three buildings involved in the project and the total cost of the façade elements will be more than $60,000.

Dickey said the city, especially Hughes and the rest of the economic development department, has been very helpful during the project.

Pianist George Winston is one of more than a dozen major acts to grace the Suffolk Center for Cultural Arts... read more