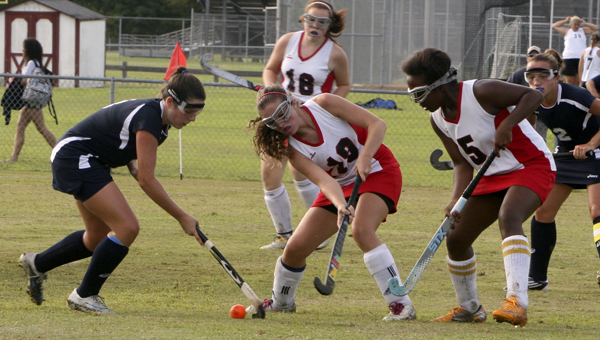 Lakeland forward Summer Parker backhands the ball away from the Nansemond River defense inside NR’s arc during Wednesday’s Southeastern District match at Nansemond River. Parker scored Lakeland’s first six goals of the day and the Lady Cavaliers went on to an 8-2 win improving to a 5-0 district record.

It’s a high hurdle for a Lakeland forward to make a mark in the Lady Cavalier field hockey record book. Summer Parker’s six goals, all in the first half, Wednesday at Nansemond River goes somewhere on the list.

Parker gave the Lady Cavs the lead in the 7th minute. After Mary Gover equalized for the Lady Warriors two minutes later, Parker put Lakeland ahead again in the 18th minute. She caught fire from there with four goals in the last 9:03 of the half.

“I don’t know if anyone ever has. It’s at least been a very long time,” Worley said.

It’s not for lack of outstanding scorers during Lakeland’s reign as a field hockey power. A bit strangely perhaps, one reason for Parker’s outburst was because the Lady Cavs faced a challenge from Nansemond River for the first 20 minutes of the match.

“Usually when we score a lot of goals, we wind up sort of controlling who gets the goals,” Worley said, “but in this game we didn’t really have control.”

While the final margin ended as another Lady Cavalier romp, Nansemond River scored the first goals against Lakeland in a district game since Oct. 2009.

Parker pushed in a rebound from a shot by Alexis Albright and a save by NR keeper Lindsey Hunter for the opening goal.

The Lady Warriors attacked straight from the ensuing restart and earned a penalty corner. Mary Gover’s hard shot from the top of the arc got deflected, acting as a change-up to go past Lakeland keeper Erin Bradshaw for a 1-1 score.

The Lady Warriors kept some of the action in midfield for the next few minutes. Hunter saved eight of the first nine shots she faced before the Lady Cavalier attack became too much.

Off a Lady Cavalier corner, Alexis Albright took a slapped pass from Kasey Smith and passed by the keeper to Parker near the left post for a goal and a 2-1 Lakeland lead with 12:13 to go in the half.

The Lady Warriors had a chance, with a couple shots and a penalty corner, for another tying goal.

Instead, Lakeland struck on another corner. Parker passed to Smith at the top of the arc. Smith sent the ball back to Parker for a quick redirection into the cage.

Parker chased down her own rebound and sent a backhanded flip into an unprotected goal, as Hunter had to sprawl to stop Parker’s first try, for a 4-1 Lakeland lead with 3:41 left.

Ball movement from Kristen Vick to Alexis Albright to Smith to Jillian Bates, with Bates sending a cross to Parker for a one-timed slap into the goal from close range, made it 5-1 with 2:41 left.

Seconds after Bradshaw saved a shot by NR’s Markelle Patterson on a 1-on-1 break, the Lady Cavaliers countered at full speed. Parker slapped in a pass by Smith for a 6-1 score with 0:28 left.

“(Nansemond River) pressured us pretty hard. When you have a wet field, the game slows down some, and playing versus a fast defense that closed in on us, their defense pressured where the ball was, so Summer was wide open a lot,” Worley said.

Jordan Morris fired a slap shot in from far on the left wing for a Lady Warrior goal a couple minutes into the second half.

Smith and Jamee Albright added Lakeland goals later in the half. The whistle for the mercy rule came a few seconds after Albright’s goal.

“I definitely prefer a game where my kids have to step up and answer, and today we had to answer. We had to work hard after letting one in (to make it 1-1),” Worley said.

Nansemond River’s next match is Wednesday at Indian River. Lakeland meets the Beach District’s Ocean Lakes (3-1) on Friday at 4:30 p.m. at the U.S. National Training Center.

ODU field hockey is unanimous No. 1