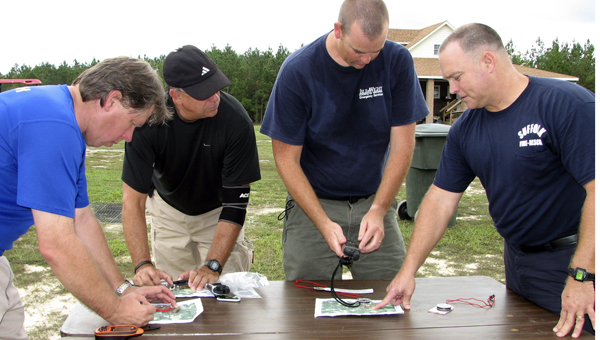 Senior firefighter David Dickens is no stranger to navigating the land for search and rescue missions.

After 14 years with Suffolk’s search and rescue team, Dickens is more than familiar with the land navigation techniques used to find missing people. But that doesn’t mean he’s done practicing.

“It’s a use-it-or-lose-it skill,” Dickens said. “The more you train with it, the better you’re going to be.”

To keep their skills sharp, Dickens and more than a dozen other search and rescue workers participated in a land navigation training session Tuesday and Wednesday.

The session was a joint effort of the Suffolk Department of Fire and Rescue and Tidewater Search and Rescue, a locally-based group of volunteers that provides extra assistance to cities during search efforts.

The class was taught by Rob Speiden, of Natural Awareness Tracking School, which is based in Christiansburg.

Suffolk Fire and Rescue Lt. Mason Copeland, who hosted the session, said land navigation is an important skill, but also one of the hardest techniques for search and rescue workers to retain.

“The tough part for most people is land navigation,” he said. “If you don’t practice enough, you can really forget it.”

In addition to Dickens, 10 Suffolk firefighters and seven TSAR volunteers participated in the course on their own time.

The class covered the basic of land navigation techniques, including finding coordinates on a map, using compasses and utilizing landmarks.

Copeland said it’s especially important to get search and rescue workers accustomed to navigating at night.

“At night, the maps don’t change, the land doesn’t change, nothing changes, but we want people to get used to it,” he said.

Copeland said land navigation skills can be used in all search and research efforts, including operations to find lost hikers, children with autism and Alzheimer’s patients.

TSAR operations officer Bart Drummond said he hasn’t participated in many searches this year, so he signed up for the course to get extra practice.

“This is basically sharpening existing skills,” he said. “This builds on skills and keeps us from getting rusty.”