When Rich Babbitt took a paper route and mowed lawns to earn money as a teenager in Portsmouth, he didn’t realize he was developing an ironclad work ethic that would carry him through his professional life. 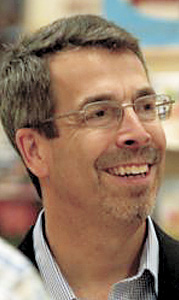 “I can never remember my parents saying you need to get a paper route,” Babbitt said. “It was kind of something you just did.”

Babbitt went on to earn his degree in business marketing from Old Dominion University and work in the restaurant business for 20 years before getting into banking seven years ago. Babbitt now lives in the Richmond area.

Decades after his paperboy days, he realized his first job had instilled in him, and many other Baby Boomers, a skill set that made them better workers, and he decided to put those ideas into a book.

“What makes up the Boomer work ethic is that we already knew how to work before we went to work,” he said. “It wasn’t like the work was separate to our youth, it was part of it.”

Babbitt’s book, “From Paperboy to Boomer: How Lessons Learned from Paper Routes and Lawn Mowing Have Shaped 10 Skill Sets of Today’s Leaders,” was published in paperback Sept. 1, and the book will premiere for the first time in Hampton Roads this weekend.

To celebrate the book launch, Babbitt and TowneBank are hosting a Paperboy Reunion at the bank’s Member Service Center Saturday from 10 a.m. to noon to kick off his book tour in Hampton Roads.

For the event, TowneBank is inviting both men and women who used to deliver papers to reunite and hear Babbitt discuss the themes of the book and share paperboy stories.

“From Paperboy to Boomer” will be available for $10, and Babbitt will sign books at the event. There will also be a newspaper-throwing contest.

Babbitt said he will talk about the main themes of the book, like work standards, people skills, business basics and leadership skills.

“The Boomer work ethic is characterized by self-initiative, self-motivation and self-discipline,” he said. “We didn’t know it, but we learned how to work a budget, profit and loss statement, cash flow.”

TowneBank vice president Bill Hodsden, who is also a former paperboy, will also discuss how his paper route affected his professional life.

Babbitt said he approached TowneBank about the event after his mother, who still lives in Churchland, read a newsletter written by TowneBank Chairman and CEO Bob Aston about how being a paperboy changed how he worked.

At the time, Babbitt had just self-published his book.

“After I read it, I overnighted him a copy of the book,” he said. “It’s the exact same basic theory. It showed me a lot of people in business can trace their skills back to the paper route.”

In addition to the TowneBank event, Babbitt will sign books at the Book Owl, on Churchland Boulevard in Portsmouth, from 2 to 4 p.m. Saturday.

For more information on Rich Babbit, his book and the event, visit www.boomersbook.biz.