Be a Santa to a senior 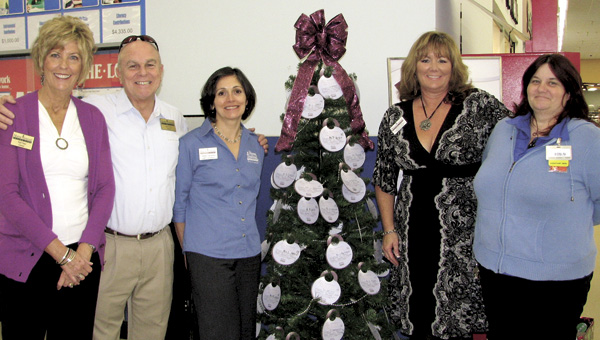 Staff members of the Suffolk office of Home Instead Senior Care, from left, Nell and Larry Neal, Kathie Czerwinski and Deneen Evans, and Robin Gilmette, Walmart assistant manager, put up the Be a Santa to a Senior giving tree at the Walmart on North Main Street Thursday. The tree will be up until Dec. 16.

During this holiday season, the Suffolk office of Home Instead Senior Care is inviting residents to bring Christmas to senior citizens.

For the first time, the office is participating in Home Instead’s nationwide “Be a Santa to a Senior” campaign to provide gifts to elderly individuals in assisted living facilities.

“It’s like the angel trees but a little different focus,” said Deneen Evans, the community services representative for the office. “It’s geared to senior citizens.”

Suffolk’s Home Instead has gotten 78 names of residents of Oakwood Assisted Living who “sometimes get left out” during the holidays, Evans said, and what they need for Christmas.

“They are living in an assisted living facility that is low-income,” she said. “A lot of them don’t have family or funds at all.”

They put the names and wishes on ornaments and put them on Christmas trees that are at the Walmart on North Main Street in Suffolk and Rose’s on Armory Drive in Franklin from now until Dec. 16.

“Most of the needs are blankets, throws, socks, toiletries — those sorts of things,” Evans said.

Shoppers will be able to pick an ornament from the tree, buy items on the list and return the unwrapped gifts to the stores.

Evans said there might be a lot of items listed on the ornaments, but customers don’t have to buy everything on it — they can pick a few of the items.

After the gifts are collected, office workers and volunteers will wrap and deliver the presents to Oakwood.

“We want everyone who has their name on the tree to have at least one gift,” Evans said. “If they could get one item, it would be wonderful.”

She said they understand that times are tight for many families, but any help would be appreciated, especially because many of the seniors are veterans or have spent their lives serving the community.

The Suffolk Home Instead office opened in 2008 and serves Suffolk, Franklin, Smithfield and Southampton and Isle of Wight counties.

For more information about the program, visit www.beasantatoasenior.com.