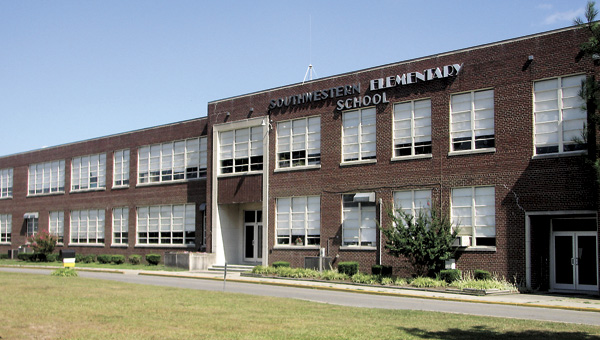 Southwestern Elementary School, shown in a file photo, is one of nine schools in the Suffolk Public Schools system that still has asbestos materials in the building.

School officials say it’s not a concern unless damaged

It’s been more than 20 years since asbestos was determined to be dangerous, but Suffolk Public Schools is still coping with the ramifications of its former widespread use in building materials.

Since the federal government started regulating the use of asbestos in public buildings, the school division has assigned funds specifically to deal with asbestos in some of the schools.

Terry Napier, the school division’s director of facilities and planning, said the city has allocated about $75,000 to the schools every two years to deal with removal of hazardous materials, including asbestos.

However, he said, the money isn’t usually used to remove the material.

“What the regulations did was come up with laws as to how you would treat existing asbestos in school buildings,” he said. “Removal was not required, and it still isn’t, unless the materials are damaged.”

Asbestos, which is a naturally occurring mineral fiber, was widely used in building materials from the late 19th century until about the 1990s, according to the Environmental Protection Agency website.

Schools built after the 1980s, such as Nansemond River High School and Creekside Elementary School, are in the clear.

“All of those schools would have no asbestos building materials in them,” Napier said.

While asbestos can create health risks, Napier said, the school’s students and staff aren’t necessarily in danger if asbestos is in the building.

Materials containing asbestos typically become hazardous only if they become damaged or deteriorated and release asbestos fibers into the air, according to the EPA website.

“As long as it remains intact, you don’t have to do anything with it,” Napier said. “For our schools in Suffolk, it applies primarily to pipe insulations. There were also floor tiles that used asbestos installed in some of the schools.”

Still, the schools that have asbestos are very closely monitored.

“We have to have all of these schools (with asbestos) inspected every three years,” Napier said.

For the three-year check-up, he said, the schools hire an EPA-certified industrial hygiene contractor to examine the building.

“We also have to check it in-house twice a year,” Napier said.

On top of the close examinations, there are also strict regulations on how the schools should remove asbestos if they want to do a renovation.

Napier said there have been multiple occasions where the division decided to replace floor tiles that contain asbestos just because they were aging, and a special contractor has had to come in for the removal.

He added the entire procedure for the removal is expensive, so separate funds are needed.

In addition to the repairs, he said, the money could be used if asbestos needs to be removed immediately because it becomes damaged, but it’s not common.

“We haven’t had a situation where something became damaged and we had to go in and do an emergency repair,” he said.

While the city gives the school division money for hazardous materials every two years, this year the division has asked the city to allocate $50,000 a year instead.

“What we are trying to do is ensure we don’t come to the end of the two years and not have the funds if we need,” Napier said.

While many of the buildings still have asbestos in them, Napier said, a good deal of the material has been replaced.

One of the most recent removals was at John Yeates Middle School, where floor tiles were replaced this summer.

“Over the course of the years, a lot of the asbestos has been removed,” he said. “We don’t have a lot of trouble with it.”