Even after her girls had moved on, Blackman continued to help the organization as long as she could. 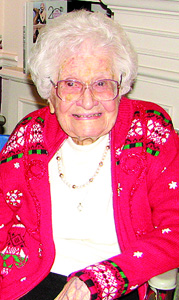 Now, at 106 years old, Blackman is being honored with a lifetime membership to the Girl Scouts.

“She was very, very active in it for many years,” Blackman’s daughter Elizabeth Eberwine Johnson said. “I think she really enjoyed it. She felt like it was good community service.”

What makes Blackman’s lifetime membership so special is it was given during the Girl Scouts of America’s 100th anniversary.

Johnson said Betty Hoover, a former Girl Scout professional who goes to Johnson’s church and knew Blackman during her Girl Scout days, wanted to do something special for Blackman this year in honor of the anniversary.

“She took a very special interest in her,” Johnson said. “Betty thought it would be a nice thing to honor Mother. I think it’s very well-deserved.”

Born in October 1905, Blackman grew up in Chattanooga, Tenn., and moved to Portsmouth when her husband, Ralph, got a job at the Navy shipyard in Norfolk.

Blackman now resides at Province Place of Maryview in Portsmouth, but she was active in her community, especially with Girl Scouts, for most of her life.

Blackman’s service with the Girl Scouts started in the late 1940s when her daughters were growing up.

“She really wanted us to be in a Girl Scout troop,” Johnson said. “And to have a troop they needed a troop leader, so she decided she would do it.”

She said her mother would engage in any Girl Scout activity, even if it wasn’t something she was familiar with or fond of.

“We worked on a lot of badges, like boating, camping and sewing,” Blackman said.

“She seemed to always be ready to try something new,” Johnson said. “When she wanted to do something, she did it.”

One year, in order to help her troop earn a certain badge, Blackman learned how to call square dancing.

“She got a record on it and learned how to do it,” Johnson said. “She taught us all how to square dance.”

As an experienced seamstress, Blackman also had no trouble helping the girls in her troop earn sewing badges. But there was one thing she wouldn’t do.

“Mother was not into what I would call tent camping,” Johnson said.

Although the girls wanted to go out into the wilderness, she said, Blackman preferred the comforts of home.

So the group compromised and found a farm to use as a campground.

Johnson said there was a cabin with beds on the property, and that was as far as her mother would go.

While she didn’t want to do some of the tasks herself, Johnson said, Blackman was always supportive of the girls and would try to figure out a way for them to enjoy themselves.

But her mother supported the girls in lots of other ways as well, Johnson said.

“She did go out of her way if she knew a girl was having a problem at home or having trouble communicating with her parents,” she said.

Blackman said she saw her role with as a Girl Scout troop leader as an opportunity to be a good example for the girls.

“It was a challenge to try to impress in them standards and morals,” she said. “I needed to show them and tell them what was the best way in life.”

“She was just very interested in the young people and to make sure they had ideals taught to them and let them know that they did have an obligation to give back to their community,” Johnson said.

“You were such a good leader they wanted you to train them,” Johnson said to her mother.

In addition to her work with the Girl Scouts, Blackman was an active member in her church, West Side Christian, where she was a charter member, taught Sunday school and vacation Bible school, and led the youth group.

She also served as the president of the PTA at Wilson High and Port Norfolk Elementary schools, and she volunteered for the American Red Cross Blood Mobile until she was in her 80s.

Johnson said she thinks her mother is a remarkable woman and someone to look up to for her service to her family, church and community.

Stay healthy during the holidays