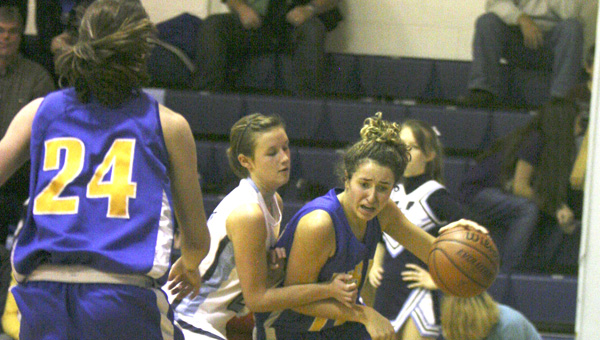 Nansemond-Suffolk's Jessica Pieroni drives to the hoop against Tidewater Academy's defense during NSA's 47-26 win in the championship game of the Tidewater Academy Christmas Tournament Tuesday night. Pieroni had 10 points and five rebounds. The Lady Saints improve to 7-3 overall.

WAKEFIELD — Nansemond-Suffolk’s girls basketball lost close contests to Great Bridge and Norfolk Academy in its own Christmas tournament last week but had no problem being a holiday guest at the Tidewater Academy Christmas Tournament this week.

The Lady Saints (7-3) beat StoneBridge 63-41 Monday and cruised to a 47-26 win over the host Lady Warriors in the championship game Tuesday evening.

Led by 12 points from senior center Sarah Baldwin, NSA got production from all spots of the court against Tidewater Academy. NSA won the first three periods easily and led 28-9 shortly into the second half.

NSA moved the ball in, out and over Tidewater Academy’s zone defense without much problem in the early going.

Once with Macy Mears delivering the pass and the next time with the assist by Morgan Lokie, Harper Birdsong cut behind the Lady Warrior zone for what effectively were alley-oop plays, albeit well below the rim, for NSA hoops in the opening period. NSA led 12-3 after eight minutes.

Lokie and Baldwin ran a 2-on-1 Lady Saint break, with Baldwin getting the basket, followed by Jessica Pieroni intercepting a Tidewater pass seconds later and another Baldwin basket for a 22-7 NSA lead late in the second period.

NSA and Tidewater traded empty possessions for the first couple minutes of the second half before five quick Lady Saint points. Lokie drove down the paint for a three-point play and Kaylor Nash’s lay-up, coming off another turnover and Lady Saint break, made it 28-9 NSA.

Nansemond-Suffolk is 6-1 against fellow Virginia Independent Schools competition this season and has held four opponents to less than 30 points out of those seven games.