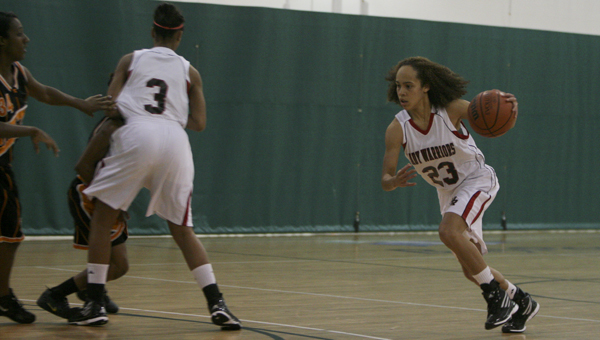 Nansemond River’s Janel Cannon drives to the hoop during NR’s game against Churchland in the Ronald Curry Christmas Classic at the Boo Williams Sportsplex on Thursday.

HAMPTON — Led by senior Denell Fox battling in the paint for 22 points, Nansemond River claimed third place in its division of the Ronald Curry Christmas Classic with a 56-48 victory over border neighbor Churchland Thursday night.

Fox led the Lady Warriors throughout. When Fox, a 5-foot-10 forward, received a pass near the hoop, she tossed in short and mid-range jump shots. Even when her teammates weren’t looking for Fox inside, she worked hard on the offensive glass, turning those chances into buckets or trips to the foul line.

Even with the challenges Churchland was posing, NR point guard Ashante Humphries hit a jumper off the dribble and off the glass for a three-point play, followed by sub Sonnae Gibson hitting back-to-back shots as soon as she entered the game, for a 7-0 NR run and a 16-10 lead five minutes into the game.

Fox scored nine points in the first quarter, including three buckets off of offensive boards, and NR led 21-14. While by no means in easy fashion, the Lady Warriors led the rest of the way.

Janel Cannon was fouled while making a pull-up jumper and finished the three-point play for a 26-19 NR lead early in the second period.

The Lady Warriors pulled away with another short burst. Jasmine Arthur’s lay-up on a fast break, followed by a Humphries steal setting up a Cannon jumper, then Humphries getting another steal and taking this one in for a lay-up made for six NR points in a row as part of an 11-4 finish to the half for a 34-23 Lady Warrior lead.

With the lead, the Lady Warriors successfully slowed the game in some stretches of the second half.

Churchland closed to within 36-30 before Fox made two free throws and, on the next Lady Warrior possession, made a jumper from along the baseline for a 40-30 NR margin.

Laura Ortiz and Fox finished back-to-back Lady Warrior fast breaks for lay-ups and a 48-34 lead with 1:10 showing in the third.

The score stayed put until a little more than two minutes had elapsed into the fourth quarter. The Lady Warriors were content to take 30-45 seconds off the clock with most of their possessions.

NR got a key stop and ran 45 seconds off the clock with its next time with the ball before a Churchland foul. Gibson missed the first shot of a 1-and-1, but the rebound deflected out of bounds to River.

Now with Churchland having to trap everywhere, Humphries cut to the hoop for an easy lay-up and a 56-46 NR lead with 0:48.

Fox had eight rebounds and four steals to go with her 22 points. She made 8-of-13 free throws.

The Lady Warriors in the Ronald Curry Christmas Classic

at the Boo Williams Sportsplex, Hampton

− The Lady Warriors are 6-4 overall and will play at Western Branch Tuesday at 7:30 p.m.