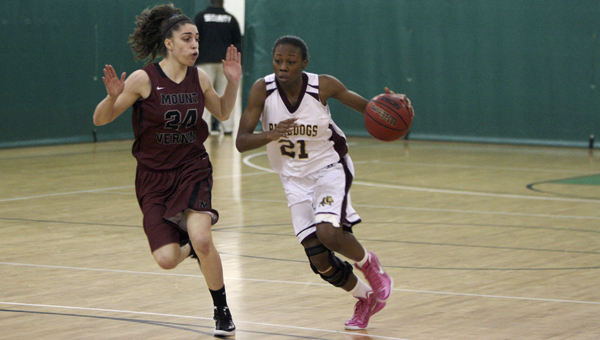 King’s Fork’s Chantel Roberts drives to the basket during Thursday night’s championship game in the Ronald Curry Christmas Classic at the Boo Williams Sportsplex in Hampton.

HAMPTON — King’s Fork’s girls basketball team left its undefeated record behind on the last night of the Ronald Curry Christmas Classic thanks to Northern Virginia guest Mount Vernon pressing, trapping and shooting its way to an easy 67-46 victory in the championship game Thursday night.

While a perfect record, which was 8-0 for the Lady Bulldogs, is really nice, hopefully for King’s Fork the experience gained going up against such an opponent will be valuable for the rest of the season still to play.

After the Lady Bulldogs gained a 3-0 lead in the first two minutes, Mt. Vernon, from Alexandria, blitzed King’s Fork with the next 14 points.

In some stretches, the Lady Majors kept KF from advancing the ball past midcourt for three or four straight possessions. Mt. Vernon forced 34 Lady Bulldog turnovers for the night.

King’s Fork settled in a little in the second period. KF found center Khadedra Croker inside a few times. Croker, a 6-foot-4 sophomore, scored a hoop inside followed by a 1-for-2 trip to the line on the next KF trip, bringing KF within 32-18.

Five very quick Mt. Vernon points, with a three-pointer followed immediately by a steal and lay-up, canceled any Lady Bulldog momentum. Mt. Vernon led 43-21 at halftime. Croker led King’s Fork with 13 points in the half.

The Lady Bulldogs go back into Southeastern District play with a showdown for first place at Grassfield on Tuesday at 7:30 p.m. The Lady Bulldogs and the Lady Grizzlies sport 6-0 district records to be two games ahead of Nansemond River and Western Branch, both at 4-2.

The Lady Bulldogs in the Ronald Curry Christmas Classic

at the Boo Williams Sportsplex, Hampton

– The Lady Bulldogs are 8-1 overall and will play at Grassfield Tuesday at 7:30 p.m.