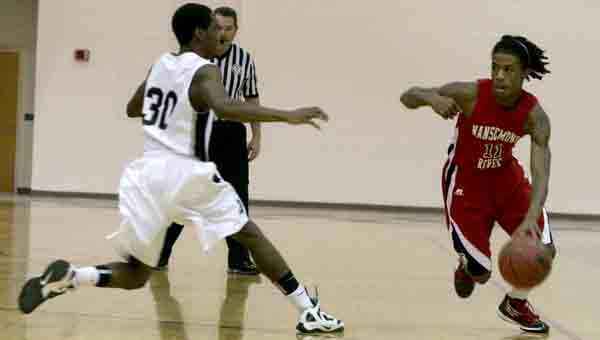 Nansemond River guard Shannon Evans scored 18 and 24 points in the two Warrior victories in the Fourth Annual Spartan Holiday Classic in Laurel, Md. Wednesday-Thursday. Evans scored 20 points in the second half of NR’s 58-53 win against Baltimore City College in the championship game.

Nansemond River’s boys basketball squad got the challenge, and the trophy, with a 58-53 win over Baltimore City College in the final of the Fourth Annual Spartan Holiday Classic in Laurel, Md. on Thursday.

The Warriors (8-1) came out on top of a back-and-forth second half against the Black Knights, the No. 3-ranked school in the Baltimore metro area. 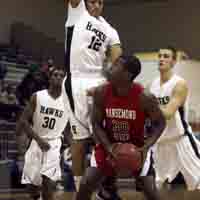 “Our kids did a great job of keeping their composure and continued with our game plan of mixing different defenses and attacking their physicalness on offense,” Young said.

The Black Knights led 25-23 at halftime. With an 8-0 run along the way, the Warriors led for most of the third period and were ahead 40-36 going to the fourth quarter.

Baltimore regained the lead in the fourth quarter only for Nansemond River to move ahead again and hold on in the closing seconds.

Jay Melendez made a breakaway lay-up to give NR a 56-53 edge. Shannon Evans, who scored 20 of his 24 points in the second half, made two foul shots for the final 58-53 score.

Wallace and the Warrior post players went up against Baltimore’s Charles Tapper, who finished with 14 points and 12 rebounds. Tapper, at 6-foot-5 and 240 pounds, has a football scholarship to Oklahoma starting next year. Young said Tapper is a “man-child athlete.”

“We were playing a somewhat miniature version of the Booker T. Washington team that beat us in last year’s regional quarterfinals,” Young said.

The Warriors opened the Spartan Holiday Classic with a 67-56 win over Parkdale (Md.) on Wednesday.

Brite scored 14 of his 23 points in the fourth quarter to go with seven assists and five steals. Evans had 18 points. Wallace had 12 points and eight rebounds. John Joyce had 10 boards and six blocks.

Nansemond River is 17-4 in holiday-time tournaments through the last eight seasons.