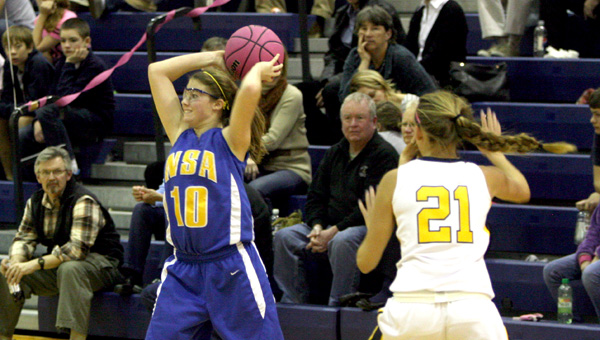 Nansemond-Suffolk guard Macy Mears passes before a Hampton Roads double-team gets to her during Friday’s non-conference contest in Newport News. NSA (9-3) beat the Lady Navigators 46-38.

NEWPORT NEWS—Whether fast or slow, racing the ball up and down the court, or literally standing around with it, Nansemond-Suffolk’s girls basketball team got the job done with a 46-38 win in a non-Tidewater Conference game at Hampton Roads Academy Friday evening.

In the opening half, the Lady Saints (9-3) pressured and sprinted their way out to control of the game after the Lady Navigators netted the first two hoops of the game. 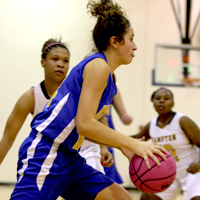 Sophomore Jessica Pieroni led Nansemond-Suffolk with 18 points as the Lady Saints won 46-38 in a non-Tidewater Conference game at Hampton Roads Academy Friday evening. NSA shot 6-for-12 from the field as a team in the second half and improves to 9-3 overall.

Holding a 30-18 halftime lead, and with HRA content to sit in a zone defense until the final few minutes of the game, the Lady Saints patiently took a minute or more off the clock on some possessions.

Hampton Roads got out to a 4-0 lead. When NSA got on the board, about three minutes into the action, the Lady Saints set up their full-court defense and the momentum switched in a blink.

Center Sarah Baldwin picked off a pass in HRA’s backcourt then calmly sank a 16-foot jumper for a 6-4 NSA lead, and six NSA points in about 30 seconds of action.

Jessica Pieroni, who wound up leading the Lady Saints with 18 points, put in four quick points thanks to two straight steals by Harper Birdsong.

NSA forced nine Lady Navigator turnovers in the first eight minutes and used them to take a 17-10 lead.

The Lady Saints kept the pressing going. Pieroni, Birdsong and senior point guard Morgan Lokie did most of the stealing and running. Pieroni had 10 points by halftime, with smooth mid-range jump shots to go with the fast break buckets.

NSA changed the pace completely after the half. Early in the third period, two NSA possessions and one Lady Navigator possession equaled nearly three minutes off the clock and a 32-18 Lady Saint lead with 4:48 showing in the quarter.

Pieroni sank a pull-up, baseline jumper in the final few seconds of the period for a 40-24 NSA lead going to the fourth period.

As long as HRA allowed it, the Lady Saints kept taking time off the clock. NSA won the first 4:27 of the quarter 4-3.

The Lady Navigators extended their defense and made a late charge, cutting the lead down to 10 with a little more than a minute to play.

The victory gives the Lady Saints a four-game winning streak. NSA hosts The Steward School on Tuesday at 5:30 p.m.