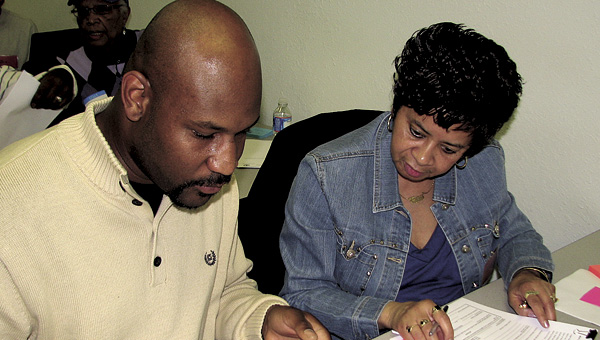 Volunteer Cheryl Murray, right, helps Nikita Daughtrey fill out the paperwork to get his voting rights restored. Daughtrey was one of about 25 felons who attended a rights restoration workshop on Tuesday.

Nikita Daughtrey has completed the supervised probation and paid all the court costs and fines stemming from his forgery convictions.

Now, he’s hoping to earn back his right to vote.

“Ultimately, I want to ask the governor to pardon my felony,” Daughtrey said.

The first step in that process was attending a Restoration of Civil Rights workshop on Tuesday night sponsored by the Suffolk Democratic Committee and the Circuit Court Clerk’s office. About 25 felons showed up to receive help in completing the application.

“There’s a huge need,” said Lisa Jackson, a volunteer with the Suffolk Democratic Committee. “They just need help getting their rights restored.”

Vickie Williams-Cullins, whose own father was convicted of a felony, said she leads the workshops, because she saw the “little piece of a man” that was left when her father lost the right to vote.

“Why is the right to vote important?” she asked the workshop participants.

“You have no voice in anything that’s going on.”

“You don’t have a say in anything.”

The rights restored in the process include not only the right to vote, but also the rights to run for and hold public office, to serve on a jury and to serve as a notary public.

“If you had served on your jury, how would you have ruled against you?” she asked.

The right to serve on a jury is one that’s especially important to felons, Williams-Cullins said.

“You’ll have some impact on realistically how the system actually works,” she said.

The application to have rights restored is not a difficult one, but it is time-consuming and requires gathering materials from a number of different places, including courts, probation offices and more.

Those who were convicted of most non-violent offenses must wait two years after completing their supervised probation and have all their court costs, fines and restitution paid. They must not have gotten into trouble with the law again and not been convicted of driving while intoxicated within the previous five years.

They fill out a one-page application, attach proof of payment and letters from their parole office and a few other documents.

“It’s a very short form,” Jackson said, adding that Virginia is one of only two states in the country that require an application from non-violent offenders for restoration of rights.
“In all the other states, it’s automatic,” she said. “It really should be here.”

But for felons convicted of most violent crimes, election fraud, drug distribution or manufacturing, they must wait five years after completing supervised probation, fill out a longer form, write a personal letter and gather three letters of reference from people in the community.

After an application is completed, it’s a waiting game. The process used to take months or even years, Jackson said, but Gov. Bob McDonnell has committed to a maximum 60-day waiting period during his administration — and seems to be sticking to it, she said.

During his time in office, about 2,300 applications have been granted, while only about 350 have been denied.

After Williams-Cullins’ presentation, volunteers were on hand to help the felons fill out their applications and explain the process. Notary publics came to notarize the forms.

Jackson said this was the first such event held in Suffolk, but organizers hope to start holding the workshops more often.