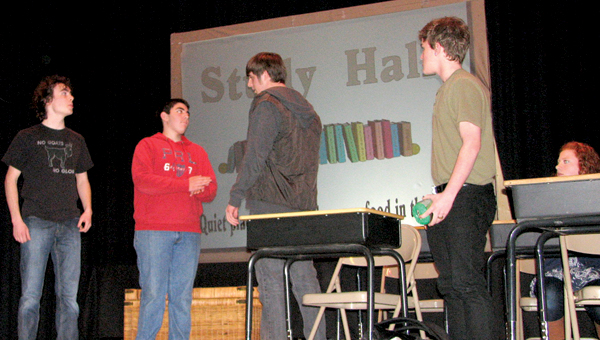 From left, Kurt and Gabe, as portrayed by Jessie Dalton and Daniel Kantrowitz, hassle Sam, played by Adam Valentine, for hanging out with social outcast Ayden, played by Justin Libbey, in the Governor’s School for the Arts’ performance of “The Unknown Variable,” a play about the damaging effects of bullying.

Even if they have not been the victim of bullying, most students have seen other students picking on their peers or using hurtful words.

But on Thursday, students at Forest Glen Middle School got a special lesson about the damaging effects of bullying with a performance from the Governor’s School for the Arts theater program.

Theater students from the Governor’s School acted out “The Unknown Variable,” a play written by a Governor’s School alumnus about how hurtful and dangerous bullying can be. Seventh- and eighth-graders at Forest Glen attended a performance Thursday.

“Words affect us,” Steve Earle, Governor’s School theater department chair, said. “We may not know it, but they really do.”

In the play, a student named Ayden is mercilessly teased by his classmates for his passion for insects.

After he is paired with Sam, one of the most popular boys at school, for a science project, Ayden thinks he’s found a friend. But after the project ends, Sam and his friends continue to tease him by calling him names and even invade his Facebook and blog with nasty comments.

The bullying gets to be too much for Ayden, and feeling like he has nowhere to turn, he disappears. Upon hearing the news, Sam feels guilty and pledges to change his ways.

But when Ayden returns, safe and sound, he isn’t sure he can forgive Sam — and the audience is left to decide whether Ayden should.

Justin Libbey, a sophomore at King’s Fork High School who portrayed Ayden in the play Thursday, said he thinks it’s critical for middle school students to understand the gravity of bullying because it is something they deal with every day.

“It can have a profound effect on people,” Libbey said.

He said he hopes students take a sense of empowerment away from the seeing the play.

“Without seeing the show, they might not report bullying,” Libbey said. “I think this show instills the idea that they need to report it.”

Nick Biecker, who wrote “The Unknown Variable,” said he thinks the subject hits home for most people because they have either been bullied or witnessed bullying.

In writing the play, Biecker said, he pulled from his experience seeing his younger brother deal with bullying.

“I hope (the students) take away that it’s not a black and white issue,” he said. “It’s a complicated issue.”

Biecker said he hopes students realize they can do something to stop bullying.

In addition to the Governor’s School guests, Susan Burk, a representative with the Matthew Shepard Foundation, a group committed to lessening hate crimes and bullying throughout the country, visited Forest Glen for the show.

“I think it’s very realistic,” Burk said. “I liked that they touched on a lot of types of bullying.”

She said she hopes the middle schoolers remember their words and actions have power.

“When you say things or act a certain way, you are affecting someone’s life,” she said. “This isn’t a game.”