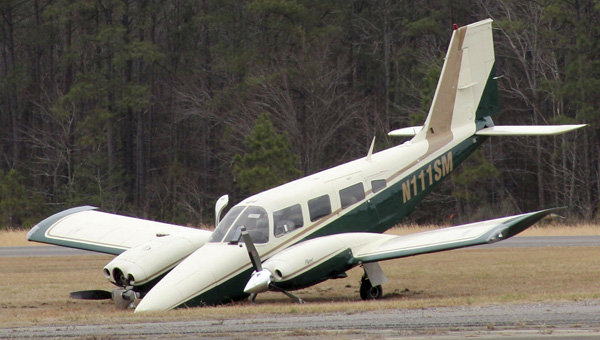 A plane having trouble with its landing gear successfully made an emergency landing Thursday afternoon at Suffolk Executive Airport.

The plane was carrying local attorney Jesse Johnson Jr., husband of Mayor Linda T. Johnson. Neither he nor the pilot, George McClellan of McClellan Aviation Services, was injured.

“I was very fortunate,” Johnson said. “He is an excellent, excellent pilot and did everything he needed to do to give us the chance to get down safely.”

Suffolk Fire and Rescue and the Suffolk Police Department responded to the scene after receiving a call at about 11:35 a.m. advising that there was a twin-engine, six-seater plane experiencing issues with its landing gear. The plane had left the airport about 9:45 a.m. on a business trip to Cambridge, Md., a flight that normally takes an hour.

Johnson said the plane had arrived in Cambridge airspace and was in the landing pattern when the landing gear would not deploy.

“George attempted to drop the landing gear so we could get in the tarmac and go to our business meeting,” Johnson said. “The main gear, the gear under the wings, dropped down, but the nose gear wouldn’t deploy.”

Johnson said McClellan tried a number of things to get the landing gear to come down, but nothing worked.

“George made the decision not to try to attempt a landing there, but to return to Suffolk, and that’s what we did,” Johnson said.

Even though McClellan continued trying to get the landing gear down the entire way home, it didn’t work, Johnson said. McClellan practiced the emergency landing several times and finally just came down on the rear landing gear and dropped the nose as the plane slowed.

“We spun around a little bit, but that was it,” Johnson said. “Obviously, when you’re in that situation, you’re saying a little prayer. Had he not been a savvy, experienced pilot, it could have been much, much worse other than just some property damage.”

The incident is under routine investigation by the Virginia State Police. Sgt. Michelle Anaya said Thursday evening that the Federal Aviation Administration is looking into why the landing gear failed.