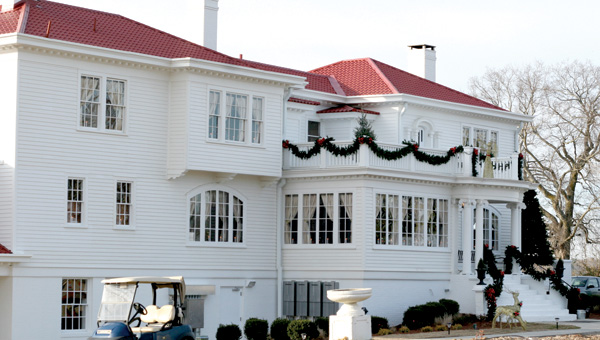 The Italianate mansion of Suffolk benefactor Amedeo Obici and his wife Louise has been remodeled to include a restaurant, golfers' lounge and pro shop for the Sleepy Hole Golf Course, where it sits on the 18th green.

Among all the things there are to love about the historic home, Rhonda Rowe’s favorite thing about Obici House is the fact that it wasn’t always standing on the “fairy-tale” site where it does now.

It has been a long journey for the stately mansion that overlooks the 18th hole at Suffolk’s Sleepy Hole Golf Course.

The quiet farmhouse that would eventually become the sprawling Obici House was built in the 1870s at Bay Point Dairy Farm Estate. Obici purchased it in 1924 and had it moved to the shores of the Nansemond River, where he set about a 7,000-square-foot expansion that resulted in the Italianate structure that is so familiar today.

By 2010, the home had fallen into such disrepair the city had posted “No Trespassing” signs, and rumors were widespread that it was in danger of demolition. Ronnie Rountree, who leases the golf course from the city, hesitated to get involved, but eventually proposed a renovation that would convert the home to a golfers’ lounge, pro shop, restaurant and special events venue.

In the end, almost everything — from the roof to the walls to the floor, even the columns that give the entryway its distinctive style — had to be fixed or touched up or replaced with as close to the original as could be found or made.

“When we ripped out the kitchen, we found the only thing that was holding the floor together was the tile and grout. There were no beams and support; that had all rotted off,” said Rhonda Rowe, Rountree’s daughter and the manager of the Obici House restaurant and its special events. “The back porch was falling off. We had to peel 17 coats of paint off one of the columns.”

But by the end of 2011, the elegantly restored Obici House was open for business.

“Now that it’s done, I’m glad we did it,” Rountree said. “You get into it and you fall in love with it.”

“We’re amazed almost every day as we go into the house, how well it was put back together and in such good shape,” said Rowe. “To know the time and energy it took to recreate the house, how it looks like it’s always been there — I’m in awe.”

Since the house’s completion last year, several parties, events and luncheons have been held, including a successful New Year’s Eve bash.

“Nobody left early, which is wonderful and which I think is a sign of a good party,” said Rowe. “When everyone was leaving at the end of the night, they all hugged and it was like one big happy family.”

That’s the Rountree family’s plan for Obici House — to make visitors feel at home, whether they are there for an impromptu tour, a leisurely lunch or their own wedding.

“I think one of our strengths as a venue is the fact that you come there, and we try to make you part of the family,” she said. “We want you to be a part of the Obici House and not just a customer.”

Nearly 30 weddings already are planned for this year, and Rowe says she takes a half-dozen calls a day asking about availability. Besides weddings and other special events, The Sunroom restaurant — open Wednesday through Saturday for lunch and dinner and for brunch on Sunday — aims to offer a wide variety of food, from fine dining to “hometown favorites.”

When Amedeo Obici died, his legacy to Suffolk included the house and a hospital. Today, Rowe said, her father hopes the newly renovated Obici House will be his own legacy.

“He does truly love the city of Suffolk. He has a heart for this city. And the Obici House is his legacy to the people of Suffolk.”

Why we love Suffolk