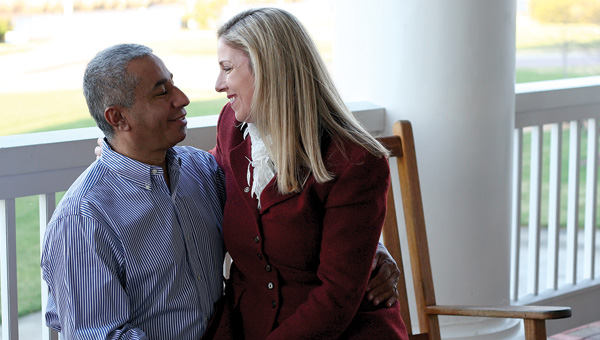 Joe Alvarez and Susan Blair were the first Americans to be married in Oderzo, Italy, Suffolk's sister city.

As the marriage commissioner for Suffolk, Circuit Court Clerk Randy Carter Jr. is no stranger to out-of-the-box wedding ceremonies.

During his tenure as clerk of the court, he has performed quickie ceremonies for soldiers tying the knot before deployment and for couples getting married for the second time each. He’s even re-married a bride and groom who had been married to each other before.

None of those nuptials, however, soared quite so high as the couple Carter pronounced husband and wife hundreds of feet above Chuckatuck Creek.

“They came into my office and asked me if I did weddings outside of the office,” he said. “I told them, ‘Of course I do.’”

“Then, they asked, ‘Would you do one in an airplane?’”

The groom-to-be and his fiancée were associated with the Hampton Roads Executive Airport and wanted to do something that would reflect their shared interest on their special day. So a few days later, Carter took a seat in a small plane with a pilot and the couple, and watched the wedding guests fade into the distance as the airplane left the ground.

“We did it all over the intercom, so I had the headset on the whole time,” he said. “I had to have a mic, too, because the people on the ground were listening.”

Everything went swimmingly until the pilot decided to make a tight circle in the sky to signify the couple’s union.

“I had a stomach virus that weekend, and he goes into this tight turn, and my stomach starts to rise,” Carter recalled. “The couple looked at me and asked if I was OK.”

Carter has seen plenty of unusual things as Suffolk’s marriage commissioner, but he isn’t the only one in Suffolk with unusual memories of “I do.”

Anyone who has been a pastor for long will have collected his own share of wedding stories, and Carl LeMon of Ebenezer United Methodist Church has a couple of favorites.

Out of the hundreds of weddings he’s performed, LeMon said, one couple stands out in memory. When the couple came to LeMon asking him to perform the ceremony, they refused to go through the usual steps, including receiving counseling from him.

“They just wanted to get married and do it as quickly as possible,” he said.

Though he prefers to have counseling sessions with couples he marries, LeMon agreed, and soon enough it was time for the big day.

“They had told me they wanted to do a unity candle,” he recalled. “I had gone over the details with them to use the candles from either side of the unity candle and light it together.”

Apparently, the instructions did not stick with them.

“When the time came to light the candle, they both pulled out their Bic lighters and lit it together,” LeMon said.

Tim Piland of Nansemond River Baptist Church has performed many wedding ceremonies and has had to deal with plenty of little mishaps — like the time a ring bearer flung the rings across the sanctuary while waving his pillow around like a Frisbee.

But one couple who asked Piland to perform their wedding ceremony almost stopped the marriage dead in its tracks before they even had a chance to say, “I do.”

“We had gone through the whole rehearsal, and it was time for the wedding,” Piland said. Minutes before the ceremony was to take place, he went to the groom with a logistical problem.

“I told him I needed the license,” Piland said.

“What license?” the groom asked.

The hapless groom didn’t know he and his bride needed a license to wed.

Left with quite the predicament and a church full of guests waiting to hear the first chords of “Here Comes the Bride,” Piland wasn’t sure what to do. But the bride came to save the day.

“It just so happened the bride had an aunt that worked at City Hall,” he said. “They went in, and they rushed it through.

“But it was a touchy moment.”

Some unforgettable wedding moments happen because of a lack of planning. But one Suffolk couple’s memorable ceremony took plenty of preparation.

Although Susan Blair and Joe Alvarez were married in a civil ceremony in 2002, they always had hoped to have a more elaborate affair later.

Both Susan and Joe are very involved with the Sister Cities program Suffolk has with Oderzo, Italy, and their numerous trips to Italy inspired their wedding.

At first, they just wanted to renew their vows in the picturesque town, but Italy’s laws wouldn’t allow it.

“In Italy, they don’t do (vow renewals),” she said. “You have to get married again.”

But the couple was determined to push through the mountains of paperwork and to do whatever it took to exchange vows in Italy.

As it turned out, the wedding was a big day for the whole town. As Susan and Joe passed through the village in an antique Fiat, it seemed that everyone had turned out to see them.

“People were out of their doors and waving,” Susan said. “I thought, ‘What are they waving at?’”

When Susan and Joe said their vows in the city’s municipal building, a crowd gathered there, too.

“I didn’t think we’d have that many people there but when we showed up, there were lots of people,” she said.

It turned out Susan and Joe were the first Americans to wed in Oderzo.

Though many couples opt for the traditional ceremony in their hometown church with a reception to follow, many veer off that path to follow their hearts.

Those weddings, as the Blairs and others in Suffolk can attest, make fond, lingering memories for participants and their guests, alike.