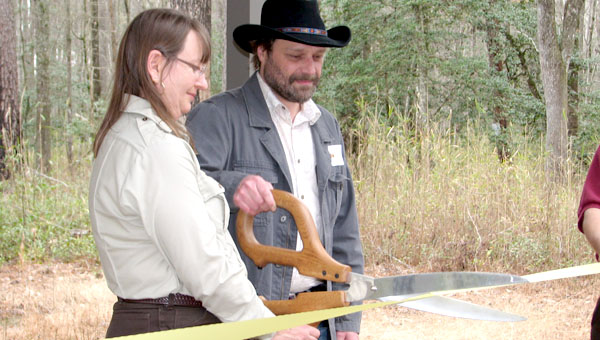 Cindy Lane, left, deputy refuge manager at the Great Dismal Swamp National Wildlife Refuge, and Daniel Sayers, professor of archeology at American University, cut the ribbon on a new interpretive pavilion in the swamp that educates visitors on the swamp’s role in the Underground Railroad.

More than a century after the last maroons left the Great Dismal Swamp, and a century and a half after the last slave escaped to freedom through the thick forest, a ribbon was cut Friday on an interpretive pavilion in the swamp that will help educate visitors on the people who lived there in secret so many years ago.

About 25 people gathered to officially open the Underground Railroad Education Pavilion. Located just a short distance into the swamp off Desert Road and accessible with a day pass from the refuge headquarters, the new pavilion is likely to attract school groups, families and individual tourists, officials said.

“It is our hope to host groups to learn about the runaway slaves that came through the swamp, that made residence in the swamp here,” said Great Dismal Swamp National Wildlife Refuge Manager Chris Lowie.

The project started more than five years ago, after the swamp was officially designated part of the Underground Railroad Network to Freedom thanks to the work of Daniel Sayers, a professor of archeology at American University.

Sayers has done extensive archeological research to find hard evidence of the legends that had endured throughout the years about runaway slaves finding their way to freedom through the swamp — or finding quasi-freedom by living deep within the swamp.

“There was a lot of anecdotal information about the history of the swamp,” Lowie said. “Dan’s tenacious work gave us the evidence.”

Using that anecdotal information, different historians have estimated that between 2,000 and 50,000 maroons lived in the swamp, which was once about 10 times larger than its current 190 square miles. Based on his archeological studies of seven different sites in the refuge, Sayers believes the true number is much closer to 50,000.

“When we put a shovel in the ground, we cannot miss finding something,” he said.

His team has found everything from the imprints of cabins to tools left behind by American Indians and repurposed by the maroons. The evidence led not only to confirmation of the legends but also to the ability of the swamp to be listed as part of the Underground Railroad Network to Freedom.

It also led, eventually, to the pavilion.

The simple structure is open-sided and constructed mostly of wood, though many parts are covered with metal to prevent damage by bears and other wildlife. Several metal benches are arranged for seating.

But the centerpiece of the pavilion is the panels, which focus on three time periods and provide narratives of the swamp’s involvement in the Underground Railroad and the maroons who lived there. The panels also feature photos of artifacts found by Sayers’ team, copies of newspaper advertisements seeking runaway slaves believed to be hiding in the swamp, and more.

Most of the information on the panels comes from Sayers’ research.

“I cannot believe this has happened,” he said Friday. “This is really cool.”

The pavilion can be accessed Mondays through Fridays, excluding federal holidays, by first visiting the refuge headquarters at 3100 Desert Road to obtain a day pass.