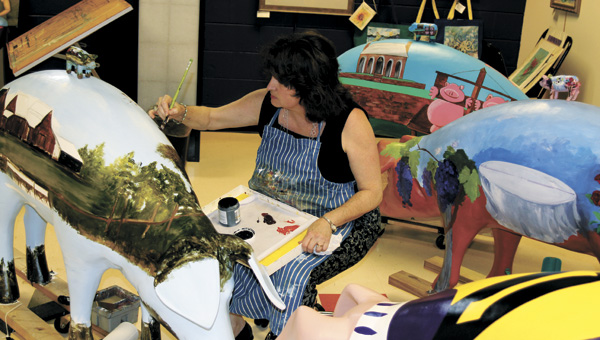 In the studio at Smithfield’s Arts Center @ 319, artist Cil Barbour gets to work on her porcine statue, titled Windsor Castle Pork. “It’s celebrating the park and the house and all the things you can do at the park,” she said.

A public art project in Smithfield aims to attract visitors and promote pride in the community by paying tribute to the town’s enduring connection to the humble hog.

Eight artists were selected to paint one life-size porcine statue each, in a competition run by non-profit group Smithfield2020, the Isle of Wight Arts League, and Smithfield & Isle of Wight Tourism. Smithfield Foods Inc. provided the fiberglass statues.

After a public unveiling scheduled for mid-year, seven statues will be scattered around Smithfield’s historic district, and the eighth will hold court on the Smithfield Foods campus.

“When visitors come to town, they kind of want to see pigs,” Arts Center @ 319 Director Sheila Gwaltney explained. “It’s a little humorous, slightly whimsical, and there’s an entertainment and enjoyment factor there.”

Four designers have been working on separate statues at the arts center, arousing the curiosity of Smithfield residents, Gwaltney said.

“First, when we took delivery of the statues, they’d say, ‘Oh, they’re rather large!’” she said. “They are life-size market hogs – if they weren’t in fiberglass, they’d probably be topping out at 250, 300 pounds. They’re good-sized hogs.”

But as residents return to monitor the progress of the paint being applied, the attitude becomes, “’Wow! These are beautiful!’ ‘I always knew hogs were pretty, but when they’re painted they’re even prettier.’ There’s a lot of history and culture of this area represented on the pigs.”

Historians say that Mallory Todd, a seaman who settled in Smithfield, exported the first Smithfield ham, to Bermuda, in the late 18th century.

Gwaltney said one of the statues, named “Birth of Ham” and designed by Mallory Jarrell, will be set near Todd’s waterfront house, whence the first hams were shipped.

One of the eight artists is Lois Chapman, a graphic designer by profession. She named her pig “Magnolia.” It incorporates a photo montage from the Isle of Wight County Museum.

“She has magnolias on her ear and a string of pearls, just to dress her up a little bit, and these photographs from the museum collection,” Chapman said. “One of the concepts behind the competition was that the pigs reflect the culture and history of Smithfield.”

The June 29 unveiling of the statues will coincide with the completion of the Church Street Beautification Project, as well as mark the start of the two-day Downtown Smithfield Olden Days Festival.

“There will be a ribbon cutting, we’ll unwrap the blanket from a pig, and we’ll dedicate and christen the statues,” Gwaltney said.

The six other pigs and their designers are “Windsor Castle Pork,” by Cil Barbour; “Swine and Roses,” by Sheila Gwaltney; “Sweet Swine of Avon,” by Brenda Joyner; “Windsor Castle Pork II,” by Abigail Ketcham; “Cultural Pig,” by Jennifer Lycke; and “Steamboat Swilly,” by Catherine Minga.