Country goodness from the ground

If you drive through Suffolk during the right time of year, you’ll see handmade signs announcing their sale. They are a staple of country cooking, and a compliment to fried chicken, ham, or even a big ol’ hunk of cornbread.

Collard greens are reminders of home when you’re from the south. They conjure up days when the cast iron skillet on the stove held their moist, rich green leaves, with chunks of salt pork or ham to season them. Their undeniable smell filled your home with the promise of a good meal in the near future. And as with many things in the South, it takes a person familiar with the taste from early in life to truly appreciate what good collards mean to country cooking. 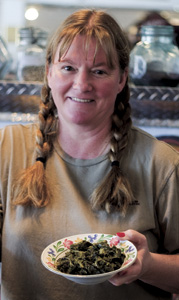 One local establishment that knows the value of collards to southern food is Farmer Frank’s Farm Market. The market was established in 1989, when Farmer Frank Holland himself began selling vegetables and peanuts from his garden. Farmer Frank’s has gained attention from people all over since that time. They’d come from miles to get his produce.

When Farmer Frank passed away, his daughter Jill Peacock picked up where the old man had left off and even made some improvements to the family business by introducing her country cooking to the market’s list of offerings.

These days, people from all around visit the small Holland Road market and eatery for fresh produce and Jill’s fine country cooking. There’s Brunswick stew, country ham sandwiches, chicken salad, and their homegrown collards by the pound.

Peacock, who spent her life soaking up her father’s knowledge of farming, believes the key to good collards essentially starts in the dirt. Using all-natural products to grow the collards makes for a finer end result.

As for cooking collards just right, Peacock keeps it simple. She cooks them in ham broth and seasons them with red peppers for a hint of spice. Once they’ve reached the desired tenderness, they’re ready for the table.

On your next drive along Suffolk’s back roads and alongside its fields, look for the signs announcing “Collards for Sale.” With the help of big pot and some pork seasoning, you’ll soon have some of Suffolk’s best country cooking on your table.