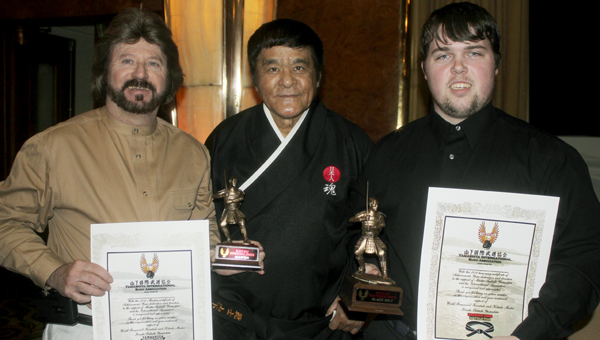 He is an instructor at Jeff Bateman’s Academy of Martial Arts in Hampton and the first student of Bateman’s to hold a black belt in Kobudo.

Bateman, who earned the special title Kyoshi (“master”) in 2006, received the Master Black Belt Achievement Award. All of the awards were given by Bateman’s instructor, Master Tadashi Yamashita, the head of the Yamashita International Budo Association.

“He does a seminar every so often,” Bateman said. “This year he did something that was unique, because he wanted to do this training on the Queen Mary.”

Bateman was referring to the RMS Queen Mary, the Cunard Line ocean liner that was originally launched in 1934 and now sits anchored in Long Beach, Calif., serving as a hotel and museum.

“So, I thought it would be unique, it’d be different, and it’d be nice to take some of my students,” Bateman said.

Bateman has taken some students with him on special trips to Okinawa, Japan where the Shorin-Ryu style he teaches originated. However, time and money constraints have made most other out-of-town seminars impossible for students to attend.

Luckado expressed an interest and was able to go on the trip, making him only the second student to accompany Bateman to one of these seminars in Bateman’s 25 years as an instructor.

“Being there was almost kind of surreal, because not many people get to go do this stuff and get to train with Master Yamashita,” Bateman said. “He’s a ninth-degree who was offered 10th. He’s pretty much (in) the top (level) you can be in, and it was just unbelievable.”

Luckado said being able to stay on a historical ship like the Queen Mary and train with a talented group of black belts were additional highlights of the trip for him.

“He loved it,” Bateman said. “This was a really good trip for him, and I’m glad to see that.”

Luckado also indicated how much of an impact Bateman and karate have had on him.

“Next degree definitely is on my mind,” he said. “Whenever I get it, I guess I’ll get it, but I’m definitely going to be staying with the school wherever Kyoshi goes. It ends up being a part of your life, instead of just a hobby you do on the side. It’s really cool.”

The Virginia Department of Agriculture and Consumer Services urges all horse owners to check with their veterinarians for West Nile... read more