Beekeepers across Virginia soon will be able to get government money for creating new beehives, a move legislators hope will resurrect the state’s dying bee population.

During this year’s regular session, the General Assembly passed legislation to establish a $175,000 fund and award beekeepers as much as $200 for every new beehive, up to $2,400. Gov. Bob McDonnell recently signed the two bills, SB 354 and HB 300, into law. 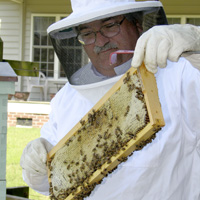 Suffolk beekeeper Chris Dove shows off part of the honeycomb in one of his hives at his Westhaven Lakes home last year. Beekeepers in Virginia will soon be able to get government money for creating new beehives, a plan many hope will resurrect the state’s dying bee population.

“We’ve seen declining bee populations throughout Virginia, and they are the foundation of agriculture,” Deeds said. “If they’re not pollinating flowers and plants, crop production begins to lag.”

State apiarist Keith Tignor is responsible for educating and training beekeepers in Virginia. Tignor said his office has received numerous phone calls from Virginia beekeepers interested in the grant program.

“We estimate that there are between 20,000 and 30,000 beehives in Virginia, around 2,000 to 3,000 beekeepers, and most maintain an average of between 10 and 12 hives,” Tignor said. “Beekeeping is a very important part of Virginia, in many different aspects.”

“There are a wide range of benefits to having a healthy bee population — not just for honey production,” Scott said.

“When bees pollinate other crops, they are stimulating agricultural production in a wide range of areas, anywhere from apple and peach orchards, to grapes and alfalfa hay crops. If we didn’t have beekeeping, we wouldn’t have other crops being as successful as they are.”

Deeds and Scott introduced their bills after judging a student competition conducted last summer at the Sorensen Institute’s College Leaders Program at the University of Virginia. The lawmakers were inspired by a group of college students who had drafted mock legislation aimed at addressing the state’s declining bee population.

Similar bills failed in previous years. The legislation, which will go into effect July 1, was initially introduced as a tax credit but was changed to a grant program by a legislative committee.

Beekeepers must apply for the grants, which will be administered by the Virginia Department of Agriculture and Consumer Services.

A series of stories appearing in the Suffolk News-Herald through Sunday highlights some of the most important yet underappreciated people... read more