The United States Senate campaign came to Suffolk this week in the form of former governor Tim Kaine, who is the Democratic nominee for the Virginia seat being vacated by fellow Democrat Jim Webb.

During a stop at the Suffolk News-Herald, Kaine talked about the economy, the military, Hampton Roads’ transportation issues and the general state of political discourse in Virginia and the nation. 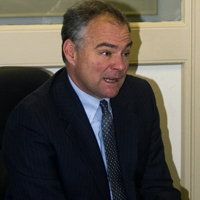 Former Gov. Tim Kaine, who is running as the Democratic candidate for the U.S. Senate seat from which fellow Democrat Jim Webb is retiring, visited Suffolk on Wednesday and discussed why he believes voters should choose him for the job in November.

“We need people who know how to work together,” he said, referring to the stalemates recently in both the U.S. Senate and the Virginia Senate. “I think the voters are tired of it.”

Virginia won accolades for its management while he was governor, and that was partly due to the Republicans in the legislature who were willing to work with him to get things done, Kaine said during a 45-minute interview on Wednesday.

The problems with transportation funding in Virginia exemplify the need for legislators to work together, despite their party affiliations and the different priorities of people from different parts of Virginia and the nation, he said.

“What we see at the federal level is an unwillingness to spend money on infrastructure,” he said, adding that some of that unwillingness derives from no-new-taxes pledges taken by some legislators before they even take office.

There is a federal role in solving Virginia’s transportation problems, he explained, but it has been hampered by the U.S. Senate’s failure to pass a long-term transportation bill since 2009.

And Hampton Roads taxpayers, who would be the ones to pay the tolls on new tunnel lanes across the Elizabeth River, are the ones who suffer, being forced to pay six out of every seven dollars for the improvements, despite the fact that there are statewide benefits from both the ports and the military being located here, he said.

Regarding the military, Kaine looks forward to a continued strong presence of installations in Hampton Roads.

“I was a strong supporter of the notion that we wanted to keep Oceana in Virginia” during Base Realignment and Closure discussions, he said. “Oceana has such sizeable employment that we need to hold onto it.”

He said he’s been in preliminary discussions with officials from NASA and the Eastern Shore regarding the potential to locate a needed outlying landing field on Wallop’s Island, and “They seem interested.”

He’s also encouraged that President Barack Obama has said the Navy will continue to be an 11-carrier fleet and that Mayport, Fla., has been taken off the table as a location for one of the carriers currently based in Virginia.

Kaine said he is concerned about the prospect of sequestration, the mandatory, across-the-board cuts the military faces if Congress cannot come to a budget agreement by January.

“I think I know how to make cuts the right way,” he said, adding that sequestration would be “the wrong cuts.”

“I think it means Congress needs to get their act together.”

With many millions of Americans still out of work and the economy on a shallow upward path, Kaine is crisscrossing Virginia, pitching an economic plan he said his based on growth, talent and balance strategies.

He would push for infrastructure spending to encourage current and future economic growth, pressing for a “comprehensive energy strategy” that includes offshore drilling and new coal technology.

He would work to improve educational standards and opportunities and “leverage military and veteran talent” to raise the level of talent available to American companies.

And he would seek balance in the political process to overcome the stalemate that exists in the Senate today, he said.

Congress, he explained, has acted in a “very unserious” way regarding the federal budget.