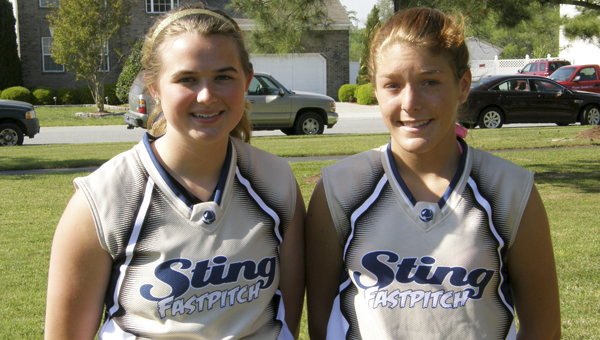 Four members of Sting Fastpitch are headed off to college this year, having followed their dreams and improved their skills through the world of travel softball. Amanda Lafferty, left, and Kenzie Conner. The team has eight juniors and looks to be strong again next year.

Four seniors on the Sting Fastpitch travel softball team began this past season with a goal to pursue their dreams at the college level.

Megan Blythe, Amanda Lafferty, Kenzie Conner and Randi Jo Coffey have taken different paths since they joined the team, but they and their coaches are all thrilled with their choices.

Blythe joined Sting last year, becoming a big contributor and bonding strongly with the team. Prior to this, she had actually lost interest entirely in pursuing softball, though it had once been her dream. 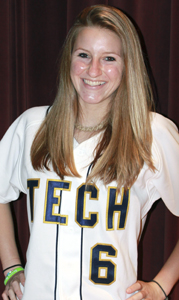 Four members of Sting Fastpitch are headed off to college this year, having followed their dreams and improved their skills through the world of travel softball. Megan Blythe is committed to West Virginia University Institute of Technology.

Sting coaches Scott Haley, Todd Thursby, and Jeff Hamilton really encouraged her to get back into the game, gave her an opportunity, and the fire was rekindled. After showcasing her abilities last year, she has signed a commitment to play for the West Virginia University Institute of Technology.

When Blythe thinks of her experience with the Sting, though, her thoughts do not dwell on herself for long.

“The significance of Sting for me is that I know I am not only bettering myself,” she said. “We work as a team to better each other and showcase each player to their fullest potential. Sting Fastpitch is more than a softball team — we’re a family. My sisters will be what I miss most.”

When it came to college, Amanda Lafferty took a different road.

“I want to be a physical therapist and to get into PT school,” she said. “You have to have, like, a 3.8 GPA and I’m going to (James Madison University), so keeping grades and doing college ball would be very difficult,” she said.

So Lafferty has decided not to play and instead will dedicate her time fully to academics.

“We’re about that as well,” Haley said. “She could definitely play college ball, but you can’t fault a kid for doing what they want to do and (what) they feel is the right direction for them and thus we didn’t. Her ability was there, but her focus was school. We’re okay with that.” 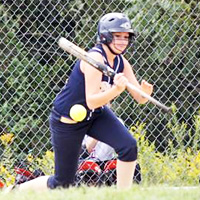 After playing for the Sting since the eighth grade, Lafferty indicated that she learned far more from her experience than just softball.

“The things (Coach Haley’s) said to me don’t only apply to Sting,” she said. “They apply to life, too, and I’ve kind of taken those and applied them to life. So, I’ve grown in life because of what my coach has said to me.”

Kenzie Conner started with the Sting when she was 12. In succeeding years, she left the team for a while, but later returned.

The Sting coaches worked her hard, and the team later went to a showcase tournament in South Carolina, facing the college team for USC Sumter. After the game, the opposing coach came up to Haley and said he wanted to talk with Kenzie.

Conner will report to the USC Sumter team in August, and she will not forget what Sting Fastpitch means to her.

“It means everything, because I learned everything here,” she said. “It all started here, and I just worked my way up, and I’m finally living the dream.”

When Randi Jo Coffey started with the team, she was a very good pitcher and she knew it. As time progressed, though, other girls began to catch surpass her.

Coffey graduated from high school last year, apparently ending her softball days and any opportunity for a scholarship.

“Over the summer, she sought me out,” Haley said. “She said, ‘Coach Scott, I know you’re putting your 18U team together, would you consider me, even though I’m in college.’ I said, ‘Well, let me ask you this: Why would you want to play?’ She said, ‘Well, I feel like that, at this point, I’ve matured enough that I really understand what I didn’t understand (before).’”

She really wanted to get into a college with softball. Haley checked with the leaders on the team, like Megan and Amanda, and they said they would welcome a hard worker.

Coffey tackled classes at TCC while racing to get to the van on Fridays for a weekend that would be inevitably full of softball games and college-level homework.

At the same tournament in South Carolina in which Kenzie was spotted by USC Sumter, Randi Jo caught the eye of Patrick Henry College. In January, she said a final goodbye to the Sting and officially joined PHC, where she currently shines as very good pitcher.

“There’s no question, everybody wants to win, but at the end of the day, the big win that we want is what happened to these four girls,” Haley said. “To me, that speaks a volume for a little old travel ball organization called Sting Fastpitch. We were able to help these girls continue their dream — there’s your story.”