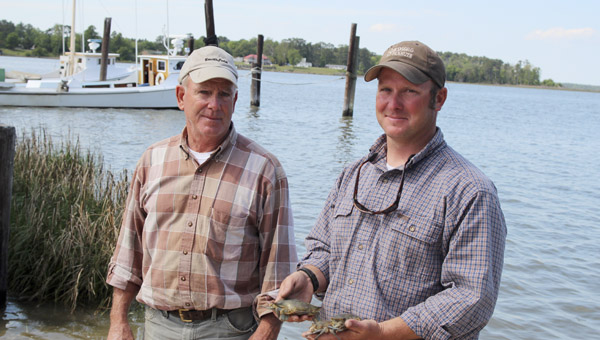 Coming from a world where earning a living means rising before dawn each workday to pull a few hundred crab pots or oyster cages from the water, a veteran waterman from Eclipse and his son don’t have great faith in efforts by authorities to restock those waters the family has lived off for over three decades.

The U.S. Army Corps of Engineers recently held public meetings to discuss the corps’ plans to restore oyster populations in the Chesapeake Bay and its tributaries.

The plan was developed with help from the states of Virginia and Maryland, three federal government agencies, the Potomac River Fisheries Commission and two nonprofits, with the stated goal of restoring an “abundant, self-sustaining oyster population” to restore ecological balance and contribute to the oyster fishery.

“I don’t think the government programs do very much to help, especially in the long-term,” 58-year-old Robbie Johnson said Friday, pausing briefly to talk in his Spartan office while catching up on some paperwork.

“We’re very fortunate that we have now more oysters than we’ve had in the past 20 years. I personally don’t attribute that to anything that a government agency has done.”

Earlier this year, Virginia Gov. Bob McDonnell announced that the Chesapeake Bay blue crab population is at a 20-year high, which coincided with 2011’s reportedly having been Virginia’s best oyster harvest since 1989.

It was an announcement delivered with a measure of fanfare — and it wasn’t long before Democratic U.S. Senate Tim Kaine chimed in, attributing the welcome news to policies enacted during his term as governor.

According to Robbie Johnson, though, the politicians and bureaucrats can tout having raised community awareness of the need to protect and replenish crab and oyster populations, but not much else.

His son Ben Johnson, 33, agrees: “It’s great in the fact that it (community and government involvement) raises the awareness of problems such as water quality, (but) a lot of the projects that are undertaken, some of them are like an exercise in futility.”

Robbie and Ben Johnson both turned to the water for a living straight out of college. The senior Johnson, who started the family business in about 1975, had studied wildlife biology, and said he saw being a waterman as a way to make an honest living in lieu of knowing what else to do. “I suppose I had the same amount of plans as anyone else who’s 21,” he said.

His son had studied economics and accounting, graduating in 2001.

“I thoroughly enjoy it,” Ben Johnson said of the life he has chosen. “I enjoy the fact that you get to see the direct rewards of your labor, being outside, being your own boss, and I enjoy the time I spend with my father.”

Another family member pitching in when not otherwise engaged is Ben and Jacob Johnson’s mother, Lisa Johnson, a nurse at Nansemond-Suffolk Academy.

As well as by the commitment of its members, Robbie Johnson says the family’s ability to endure in the business is greatly assisted by community support.

The business premises has thrice been rebuilt after storms with pro-bono assistance from area tradespeople and contractors, Robbie Johnson said, and they pay only a “very small” rate to fish their 2,000-odd acres of leased waters.

“It’s a big reason why we’re able to hold on and keep on going, the fact that we have gotten a lot of help from a lot of people when we’ve needed it,” he said.

Ben Johnson said it has been a good start to the 2012 crabbing season, which opened in March.

“(But) I wouldn’t say it has been the best start ever,” he added. “The weather has been as much a factor (as anything else) as far as finding a consistent catch day after day. We get a week of sunshine and warm weather, then a week of cold, windy weather.”

He isn’t entirely convinced by the reports of a burgeoning oyster population.

“It’s certainly a good amount right now … (but) it has been a whole lot of female crabs, which is always how the season starts,” he said.

At a career expo last Tuesday for high school students, a gentleman representing a member of the Virginia Ship Repair... read more