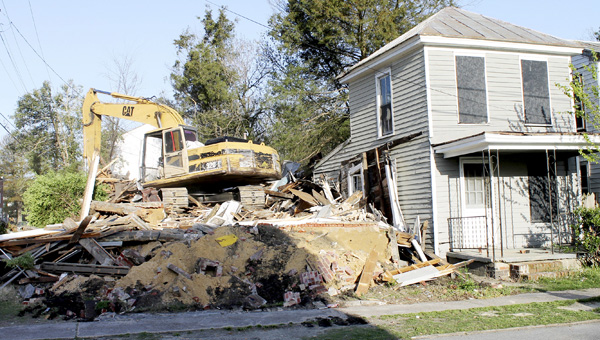 Officials from Suffolk have begun to take a hard line against blighted property within the city, as evidenced by the forced demolition of dozens of vacant buildings in the city recently.

Folks on Lee Street in downtown Suffolk woke up one Tuesday morning a couple of months ago to the sound of bulldozers.

The two vacant houses on the corner had become a familiar sight to police officers. The city said the homes had been attracting criminal activity.

“The alcoholics used to sit on the porch and drink,” said one neighbor, adding that people would break into the houses to do drugs and have sex. “The police was always called over there. I guess they got tired of it.”

The next morning, the bulldozers rid another downtown neighborhood of a house on First Avenue that had become a familiar sight to firefighters. It had been the location of numerous suspicious fires, but all were extinguished before they got out of control.

The three demolitions were part of an ongoing effort by the city to target vacant properties that are presenting safety challenges for city departments, particularly police, fire and codes enforcement.

So far this year, more than two dozen structures deemed “blighted” by the city were removed with taxpayer dollars, according to Deputy City Manager Patrick Roberts during a presentation to City Council last month. Many were in areas of high criminal activity, he added.

An additional 35 structures have been taken down by property owners as a result of the city’s code enforcement action. Dozens more are in the bulldozers’ paths if property owners don’t get them shaped up, Roberts said.

The vacant lots now are poised for redevelopment. The city hopes to partner with a company that will build new homes on the properties.

“In order to have a healthy tree, you have to prune sometimes,” she said. “It’s kind of the same thing with neighborhoods.”

Burch explained that vacant houses can breed many kinds of crime.

“It invites any type of criminal activity, whether it’s drug use, prostitutes, loitering, homeless people hiding. Any of those things are potential problems.”

Criminals running from the police also find the vacant houses a good place to hide, she said. They present a safety issue when a police officer has to enter them.

“You can even run into biohazard issues,” she said. “Oftentimes when you go into these places, because they’ve been boarded up for so long, you might find dirty needles or human waste.”

The vacant houses also cause safety problems for firefighters. They have a greater likelihood of holes in the floors, rotting structural support and other hazards, interim Fire Chief Ed Taylor said.

“If firefighters go in this type of building, we have to be very careful,” he said.

In addition, there is a greater chance of someone being in the building and firefighters not knowing about it because it has been vacant, Taylor said. And a spark can turn a vacant home into a tinderbox in a matter of minutes.

“In a lot of areas downtown the buildings are really close,” he said. “If one building started going down, it could light up other buildings.”

Roberts said in last month’s presentation that a committee of city employees continues to work to identify troublesome, vacant homes.

“Once you start drawing people into that community who are committing criminal activity, that causes the rest of the community to be affected by that one piece of property,” Burch said. “I’m a lover of history and historic buildings, but to the degree that they cause crime and the current owner is not taking care of it, those demolitions just become very necessary.”