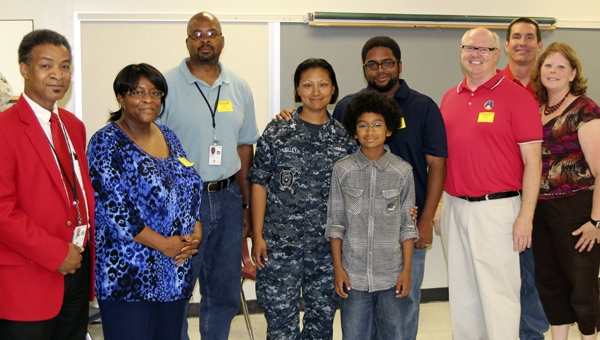 After his independent study project grabbed their attention, folks from NASA Langley Research Center and a representative of the Tidewater Chapter of Tuskegee Airmen paid a special visit to a Mack Benn Jr. Elementary student’s classroom Friday.

And what’s more, Tristan Jolley, who attracted oodles of attention last month when he and dad Brian Jolley launched a gizmo-filled lunchbox attached to a weather balloon, has been invited to Langley to describe his project and will take the controls of a plane on a Tuskegee Young Eagles flight.

At Mack Benn Friday, Langley engineer Donner Grigsby said Jolley’s project attracted so much attention at the space agency because “people told him he couldn’t do it, and he went and did it anyway, and we really like that. We’re interested in pushing the envelope.”

Jolley has been invited to talk about his project, which used a video camera to capture footage that was subsequently placed on YouTube, at NASA’s Take Your Children To Work event on Aug. 17.
The children of NASA employees would be very interested to hear Jolley describe the project, Grigsby said.

Jolley was offered the Young Eagles flight by pilot Donald Bagwell of the Tidewater Chapter of Tuskegee Airmen.

“He can expect to have to fly the aircraft,” Bagwell said. “When we’re clear of the ground, I’m going to raise my hands and say, ‘It’s all yours.’

“I’m not taking them for a ride; they’re taking me for a ride.”

NASA’s Troy Merryfield said Jolley is an inspiration for anyone whose plans are foiled by naysayers.

“If you tell me I can’t do something, I’m going to prove you wrong,” Merryfield said. “That’s what NASA does.”

Grigsby added, “What we like about Tristan, he’s into cool stuff now. You don’t have to wait to learn.”

“She issued a challenge to him to stop taking the path of least resistance, to take the challenge” he said. “I’ve seen … (the results) at home. It’s really been driven into him.”