Smithfield teen in running for ‘America’s Got Talent’

A Smithfield High School junior could be destined for the national limelight after making the top 20 in a YouTube audition contest for NBC’s “America’s Got Talent.” 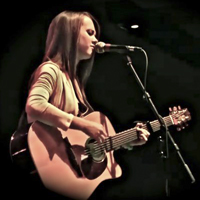 Bria Kelly, a student at Smithfield High school and accomplished performer, is in the running to appear on “America’s Got Talent,” after making the top 20 in an online audition.

Kelly is a regular performer around Smithfield and Hampton Roads, often in an acoustic set with Logan Flurry, or with backup band Kindred Place, and frequently relying on the considerable strength of her own talents alone.

A list of upcoming gigs on her website lists the Smithfield Farmers Markets alongside BeachStreet USA on the Virginia Beach Oceanfront, the Poquoson Seafood Festival, and, more locally to Suffolk, Driver Days.

America’s Got Talent hopefuls are barred from discussing the NBC show or auditions, and doing so could jeopardize their selection chances.

The show’s audition site is at www.youtube.com/agt, and voting ends July 7.

“Anywhere there is an audience, a sound system, and at least one guitar nearby, Bria loves to be there,” according to her website blurb. “Music is everything to her.”

At 11 years of age, Kelly won the Philadelphia Eagles National Anthem contest, achieving the honor of singing “The Star-Spangled Banner” in front of 40,000 NFL fans.

She has twice won first place in a Country Showdown competition at the Virginia town of Altavista, also taking out the state finals for one of those years.

Kelly repeated the national anthem honor before 8,000 people at Mt. Trashmore in 2008, after winning a contest hosted by 97.3FM The Eagle.

As first place-getter in another competition hosted by the Hampton Roads country station in 2011, she was able to perform live on-air throughout the year and open a show at the Hampton Coliseum.

Kelly’s talents were requested at Nashville’s Cadillac Ranch in 2008, and during the week she played there in the heart of Music City, she also sang two songs on the TV show “Nashville Spotlight.”

The old adage that everybody can do something is never truer than when it comes to public service. People with... read more