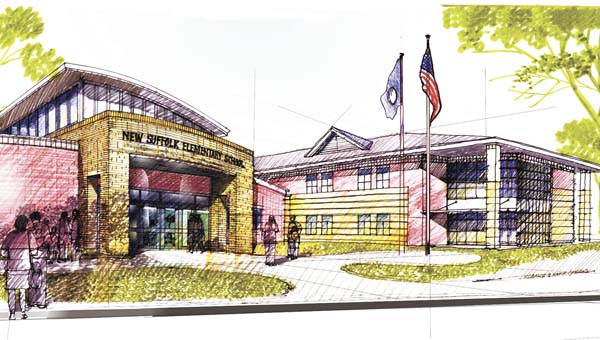 Submitted Image New school: This rendering of a new elementary school planned for U.S. Route 58 shows the main entrance. The school is going to be modeled after Hillpoint Elementary School

The Suffolk School Board has finalized the purchase of land for a new elementary school, paying $564,000 for 47 acres on the corner of Holland and Pioneer roads.

The construction bid should be issued in early October and a contract awarded by the end of November.

Replacing the aging Southwestern and already shuttered Robertson elementary schools, the new facility will serve the southwestern part of Suffolk. The site purchase and finalization of plans follow years of indecision and delays.

The main contention during that time was how many schools to build.

After the Great Recession ultimately decided the one-school model, a back-and-forth ensued between the School Board and City Council over where to build that school.

The Planning Commission approved the Pioneer Road site in February over objections from neighbors about traffic and drainage.

“We’re glad (that the sale has settled), and it allows us to move forward with the construction of the new school,” district Director of Facilities and Planning Terry Napier said Tuesday.

“Both the board and the superintendent were satisfied with that price, so they moved forward.”

Real estate transactions are typically drawn out, especially by legal procedures, and “I think it was done as quickly as they could get it done,” he said.

According to an earlier project update to the School Board by RRMM Architects Chief Executive Officer Duane M. Harver, the 700-pupil school will incorporate pre-K, kindergarten and first and second grades on the first floor, and third, fourth and fifth grades on the second floor. Special education classrooms would be on both levels.

Plans call for learning nooks on the eastern and western ends of both levels, a media center open between both levels, and adjoining gymnasium and lunchroom, which open into a single space.

The school’s front entrance will face Pioneer Road, and cars and buses will have separate entrances.

Outside, the school will include 70 parking spaces, an area for future additional spaces, and overflow parking; hard-surface, first- to fifth-grade and pre-school play areas; a space for field games; and soccer and softball fields.

The design is modeled on Hillpoint Elementary School, but with fewer classrooms, Harver said.

Construction on the school should be substantially complete by May 15, 2014, Harver said.

The Planning Commission on Tuesday gave the green light to a host of changes to the city’s sign and banner... read more