The growing bastion of Department of Defense offices and related contractors in North Suffolk known as “Pentagon South” has grown significantly in recent months.

The U.S. Navy announced in June that it would move four technology-related commands to the empty buildings that were vacated by the U.S. Joint Forces Command when it was shuttered last year. 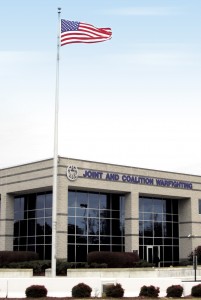 The Joint Staff Joint and Coalition Warfighting moved into one of the buildings vacated by last year's shutdown of the U.S. Joint Forces Command.

The commands, which are moving from Norfolk and Virginia Beach, are set to be in place by June 2013.

“It just puts Suffolk right there where we need to be,” said Mayor Linda T. Johnson during a City Council meeting where the new jobs were announced.

JFCOM was closed in August 2011. However, many of the personnel and duties were taken up by Joint and Coalition Warfighting, which now includes about 1,100 employees at the same site.

Still, several buildings persisted in remaining empty, and local, state and federal officials worked hard to fill them. Those are the ones into which the new Navy commands will move, bringing the site to approximately the same number of employees as before.

In addition, a prominent defense contractor close by recently received a contract to manufacture the first batch of Miniature Air-Launched Decoy Jammers.

Cobham Composite Products has about 30 jobs dedicated to the project, with more possible in the future. The devices, which weigh less than 300 pounds each, can be mounted to the outside of any aircraft. They can then be sent up to a range of 575 miles and programmed to mimic any type of aircraft on the enemy’s radar.

“They can make it look like a bomber, a jet, anything they want from a radar point of view,” said Gregg Strangways, director of operations at the Suffolk facility. “The more confusion you can create with the enemy, the better off your safety is with your actual pilots and infantry.”

Cobham is manufacturing the shells of the devices, which then are sent to a Raytheon facility to be fitted with the technology that makes them work.