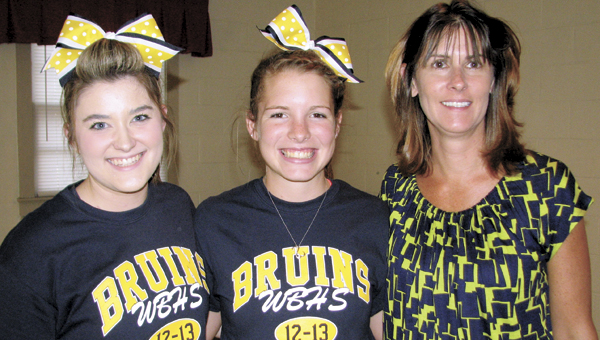 Morgan Phelps, left, and Brooke Wharam, center, accept an award from Suffolk Rockin’ Relay for Life Chair Ginny Lee Melton for having the largest team for this year’s Relay.

The 2012 Suffolk Rockin’ Relay for Life met its fundraising goal this year, supporters learned during a wrap-up meeting on Monday.

“We’re really happy that we made goal, but the truth is until nobody has to hear, ‘You have cancer,’ or ‘Someone you love has cancer,’ that’s the ultimate goal,” said Ginny Lee Melton, who was chair of the event this year. “I think we had a great year.”

The 2011 Suffolk Rockin’ Relay for Life was held May 18-19 at Bennett’s Creek Park. It was the second year for the new location.

An award for the largest team went to Bruin’s Bravest, which had more than 100 members. The team was led by teens Morgan Phelps, Brooke Wharam and Lauren Hardee, all of whom have had a parent or friend’s parent affected by cancer. Phelps’ father currently is battling cancer, Wharam’s mother died of cancer this spring and Hardee’s best friend’s father died of cancer last year.

With the 2012 Relay officially in the books, planning already is beginning for next year’s event.

The 20 or so supporters at Monday’s meeting at the King’s Fork Community House were asked to vote on whether next year’s Relay should be from Friday night to Saturday morning or Saturday night to Sunday morning. The overnight event traditionally has begun on Friday in Suffolk.

“There’s been some discussion about relaying from Saturday night to Sunday morning,” Melton said. “We want it to be the best for everybody. If you don’t ask, you don’t know.”

Other supporters are encouraged to vote by emailing Angela Francis, Suffolk community manager for the American Cancer Society, at angela.francis@cancer.org.

Those seeking committee assignments for next year’s event also are encouraged to email Francis.

For more information about the Suffolk Rockin’ Relay for Life, visit www.suffolkrockinrelay.org.

Preserving the flavors of the season By Janet Tharpe Who’s ready to jam? We’re on a canning roll here at... read more