A group of Italians visiting this weekend from Suffolk’s sister city will have a surprise awaiting them on Sunday.

The 19 guests from Oderzo, Italy, will be greeted by a statue of Mr. Peanut at the Obici House, the restored home of Amedeo Obici, Suffolk benefactor and Planters Peanuts founder, who grew up in Oderzo.

The statue was installed last week, smiling from a pedestal mounted in a circular rose garden in front of the house. Mr. Peanut is shown leaning on his signature cane and sporting a monocle and top hat. 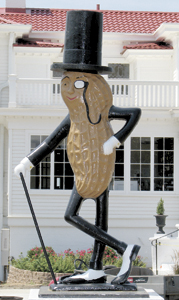 The new Mr. Peanut statue in front of the restored Obici House will greet a delegation of Italian visitors this weekend.

After years of neglect, the Obici House recently was restored by Ronnie Rountree, who has a lease on the home and the Sleepy Hole Golf Course surrounding it. It now serves as pro shop and grill for the golf course, as well as a special-events venue.

Deputy City Manager Patrick Roberts said the city learned a member of the Sister Cities group had the statue. The city approached the group with the idea of putting the statue in front of Obici House, and idea that was well-received, he said. The statue was restored by Suffolk Iron Works and erected using an annual contract for small jobs.

It initially was meant to be a secret until the visit of the Italian delegation, Roberts said, but once installed it became the worst-kept secret at Sleepy Hole.

“It’s hard to keep a seven-foot statue wide out in the open a secret,” he said. “I think it will still be a surprise (to the Italians). It’s something that adds a very unique but relevant piece of history to the work that’s been done at the house.”

The last time a delegation from Oderzo visited, Roberts said, the city made the group sign liability waivers, because the house was in full-blown renovation phase.

“We think they’re going to be blown away by what they see,” he said.

After Obici founded Planters Peanuts in Pennsylvania following his emigration from Italy, he moved the company to Suffolk to be closer to peanut producers. The Mr. Peanut character was born when a boy from Hall Place, a downtown neighborhood, sketched him for a contest to design a Planters mascot.

Rountree said he discovered the secret shortly before the statue was constructed. Even so, he is excited about it, because he has always thought a Mr. Peanut statue would be “the icing on the cake.”

The Italian delegation arrives on Thursday. They also will visit the Planters Peanuts factory, the Nansemond Indian Tribe’s annual powwow and the Suffolk Center for Cultural Arts, as well as take a walking tour of downtown.