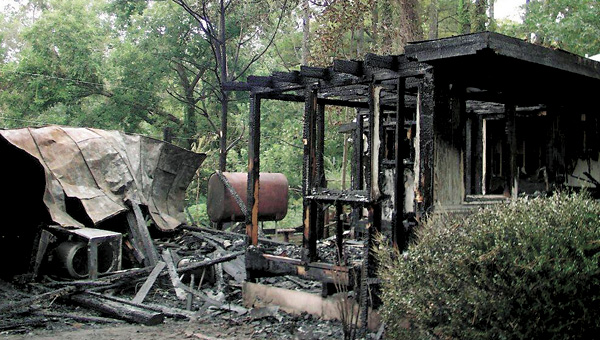 The shell of a house remains standing on Monday morning after burning Sunday night. The home was converted from a corncrib.

A fire in Chuckatuck on Sunday night caused no injuries, but it destroyed a piece of history by burning a unique house that had been part of the village for more than a century.

The corncrib in the 6000 block of Meadowlot Lane was built in the mid- to late-1800s on what was then a farm. It was added on to and converted into a house in the 1960s, said Susan Reed, who grew up in an adjacent barn that had also been converted to a house. Her nephew still owns the property.

“It’s just devastating,” she said. “It’s just a shell left of the house.”
Despite the loss of the landmark, Reed was thankful nobody was hurt in the fire.

The current renters, a woman and her 5-year-old son, were away from the house at the time of the fire. It was reported around 11:07 p.m. Sunday and quickly spread from the house to four adjacent sheds and storage facilities.

The fire was brought under control about an hour after the initial call. The Chuckatuck Volunteer Fire Department chief responded to the fire, as well as a ladder truck, four engines, a tanker, air trailer, rehab bus and medic unit.

Reed’s father was the one who converted the corncrib and barn both to houses.

“It was a cute, just darling place,” Reed said.

After her brother moved out of The Corncrib, as it’s known in the village, “a lot of different folks have lived in it,” she said.
The barn where she grew up now is a duplex and was spared in the fire.

“It’s sad to see something that was historic to end like this,” she said. “But I’m glad nobody was hurt. That’s the main thing. Everything else, you can live with.”

The cause of the fire was under investigation Monday.