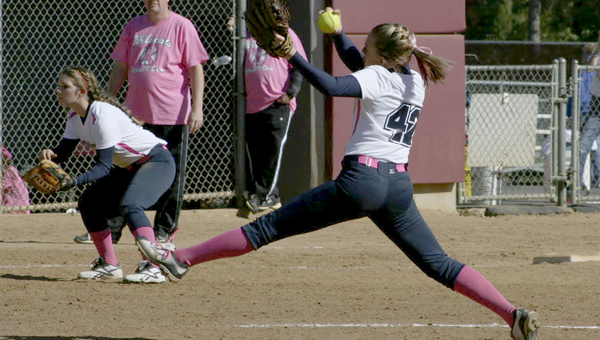 Pitcher/outfielder Eryn Haley of Suffolk has verbally committed to West Virginia University Institute of Technology after showcasing her skills with Sting Fastpitch this past summer. In college, she will play alongside both current and former Sting teammates, Alysia Cavone and Megan Blythe, respectively.

Haley, Deja Henderson, Lauren Irvin, and Alysia Cavone have all made verbal commitments that will be formalized in the next two months with their signatures.

There are a total of 10 seniors currently on the team, and more commitments are expected from some of the others.

The Sting softball season began in August, but some of these girls, including Haley, Henderson, and Irvin, were in action for the Sting at showcase tournaments along the East Coast earlier this summer as juniors.

“Eight of the 10 (seniors) are consistently out on the road,” head coach Scott Haley said. “When we’re not playing, they’re out doing college visits and meeting with the financial aid and the admissions and all that good stuff to see what the potential is for them to be able to go to these different schools.”

Eryn Haley and Alysia Cavone will continue to play softball together at West Virginia University Institute of Technology, and they will do so with Sting alumni Megan Blythe, who committed to attend the school last year.

“First, I didn’t think I was going to be able to play college softball,” Eryn Haley said. “It definitely had to do with my team, though. It wasn’t just me. As a team, we have to showcase each other. So, for me to be able to pitch in front of a coach well, I have to have a good catcher and have to have a good defense to make the plays and to make my pitching look better.”

“She did a visit and workout for the coach at Shepherd University in West Virginia,” Coach Haley said. “And we left there immediately on that afternoon and drove straight through to Charleston, W.Va., and that’s when she actually went and met with the West Virginia University Tech people.”

Haley, a senior at Nansemond River High School, was only on her second college visit, but she quickly made up her mind.

“As soon as I left there, I told my parents I didn’t want to go anywhere else. I knew my decision,” she said.

The team had welcomed her in during her visit, and it also welcomes Alysia Cavone of Menchville High School, who plays first baseand third base for the Sting.

“I was excited when I met somebody that had wanted to contact me and wanted me to play for them,” she said.

“Ever since I started softball, this is what we’ve been working for,” she said. “I’m really happy about it.”

Howard University in Washington D.C. has received a word of commitment from Deja Henderson who attends Western Branch and plays outfielder and middle infielder for the Sting.

Haley started with the Sting in the fall of 2007 with Eryn. Henderson and Irvin joined the team in 2008, forming the only remaining group to have been with the program since Haley’s start.

“You’re so excited that they’ve achieved their dream and that they’ve accomplished what they came to do — that emotion of, ‘They’re going to be gone!’ it hasn’t hit yet,” Coach Haley said.

Bryan Nuckles of Suffolk, a Nansemond-Suffolk Academy alumnus, took first place in the 50 and 100 freestyle events during a... read more