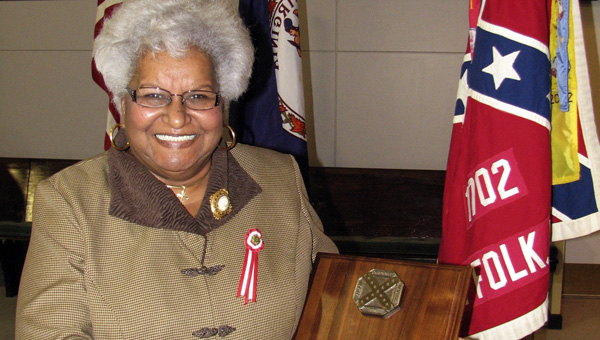 Katheryne Boone Hamilton shows off the Marion Joyner Watson award at the Tom Smith Camp of Sons of Confederate Veterans meeting on Monday. She is the second black person to receive the award honoring those who help preserve Confederate history.

The Tom Smith Camp of the Sons of Confederate Veterans on Monday presented its 18th annual Marion Joyner Watson award to Katheryne Boone Hamilton, the descendant of a free black man who served for the Confederacy in the Civil War.

Her great-grandfather, Jason Boone, was born and raised in the Skeetertown area of the old Nansemond County, the descendent of Joe Skeeter, for whom the area had been named.

Hamilton, a Holland-area native and retired nurse, discovered her ancestor’s history of service in the late ‘90s, when her sister “got bit by the genealogy research bug.” They found that Jason Boone and his brother, Anthony, both served for the Confederacy.

“Jason Boone was a member of a community of freeborn blacks that had been in existence for over 150 years,” Hamilton said, speaking of what she believes was her ancestor’s motive for fighting for the Confederacy. “He had a lot at stake. I’m sure he thought about what was going to happen to Skeetertown. (When he saw others going to war), he felt like he was obligated to march off as well. He had a home to protect as well as they did.”

Both brothers survived the war and lived to be old men. Jason Boone fathered 30 children in two different marriages.

After discovering her great-grandfather’s history of service, Hamilton read about Sons of Confederate Veterans member Lee Hart in a newspaper article and called him.

During Monday’s ceremony, Hart recalled that conversation fondly, saying they connected as if they had known each other for years.

“She is a true friend, someone who I have the utmost respect for,” said Hart, the 2001 recipient of the Marion Joyner Watson award. “We are honoring her, because she deserves it.”

Hart encouraged Hamilton to track down Jason Boone’s grave, and she found it in the Skeetertown area. It didn’t have a veteran’s stone, so Hart helped her acquire one. It was placed during a ceremony in 1999 with Confederate honors.

The event attracted national media publicity. Hamilton said many members of her family, including her children and grandchildren, have been supportive, but others would rather have forgotten about their relatives’ service to the Confederacy.

But Hamilton cannot stand by and allow the truth to be covered up or neglected, she said.

Since discovering his story, Hamilton has visited schools, churches and civic groups to talk about her great-grandfather’s service.

“It has been a 14-year odyssey of educating people,” she said. “Anytime I’m called upon, I step forth to try to share with them.”

Hamilton also is working on her United Daughters of the Confederacy application.

Tom Smith Camp Commander Mike Pullen said estimates vary for the number of blacks who served in the Confederate Army. Some sources say 60,000, but “I’ve heard numbers higher than that,” he said.

The Marion Joyner Watson award is given by the Tom Smith Camp to honor someone who has worked to preserve the heritage of the Confederacy or honor veterans in Suffolk and the old Nansemond County.

The first award was given to Watson herself shortly before she died. Initially meant to be a one-time honor of her, the chapter decided to make it an annual affair after her death.

The chapter hasn’t shied away from giving the award to black recipients. Councilman Curtis Milteer Sr. received it in 2006 after signing a declaration to observe Confederate History Month in Suffolk during a term as mayor.

Standing on the steps of the Lincoln Memorial during a recent field trip to Washington, D.C., by the King’s Fork... read more