For six years, Sting Fastpitch coach Scott Haley has helped young softball players make their dreams of playing at the collegiate level a reality. On Sunday, that reality arrived for his eldest daughter as Eryn Haley signed to play for the University of West Virginia Institute of Technology. The signing happened at Speed, Rick Cox’s all-sport training center in Chesapeake. 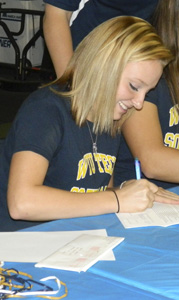 “It feels good,” Eryn Haley said. “I feel accomplished. I feel like I met the goal that I’ve always wanted to meet since I was little.”

Haley, of Suffolk, was one of six Sting team members who were signing with colleges on Sunday.

“For me, it’s a proud moment,” Scott Haley said. “When you see your child succeed — it’s awesome to see all the girls succeed — but you always have at the back of your mind, ‘Will it take its course for her?’ I can only hand it all back to her, because she put it all in.”

Haley signed officially on Sunday with her Sting teammates, but on Monday, she was recognized in a separate signing event at Nansemond River High School, where she attends. WVU Tech head softball coach Karin Gadberry, who was present at both signings, explained how significant Haley and the girls’ accomplishments were.

“In America, there’s only approximately 32,000 softball players that get to say that they participate in softball in intercollegiate athletics,” she said on Sunday. “So, if you think about it, to put things in a little bit of perspective, there’s a million kids alone playing in the city of Houston.”

This statistic made Coach Haley even more pleased both with what Sting Fastpitch and his daughter have done.

“We had six sign yesterday,” he said. “There’s thirty some thousand. What’s the odds that that happens? But when it’s your own, it’s almost like the lottery.”

Particularly when it came to Eryn, he knew it was not actually luck.

“It’s a victory for the word ‘determination,’” he said.

To illustrate, he recalled a tournament in which Eryn did not hit well.

“But that’s just her,” he said. “That’s been her drive. That’s been the mojo with that kid since day one. She put it in her head she wanted to play, and the rest is history for her.”

“I’m excited about that,” Eryn Haley said. “I’m going in already knowing people that way. I know I have to get used to the schedule and everything, but there’s girls on there that are going to be fighting the schedule with me.”

Coach Gadberry was pleased about adding Haley and the others.

“I think she can bring a lot to our team,” Gadberry said. “She’s a versatile player, and she’ll find herself on the mound, as well as in the outfield. I’m absolutely thrilled that she’s joining the team, and I’m absolutely thrilled that all three of them will be joining Megan. It’s a really good thing, it’s going to bring a lot of continuity to our team.”

Next year, Eryn Haley will be several hundred miles away from home, but her mother, Kara, indicated that the family plans to keep attending her games.

“Yes, probably not all of them, but a good amount, we’re hoping,” she said.

Though Coach Haley will see his daughter leave the Sting after next July, he will continue to help other girls who have undoubtedly been encouraged by Eryn’s success, including her 9-year old sister, Kyrsten.