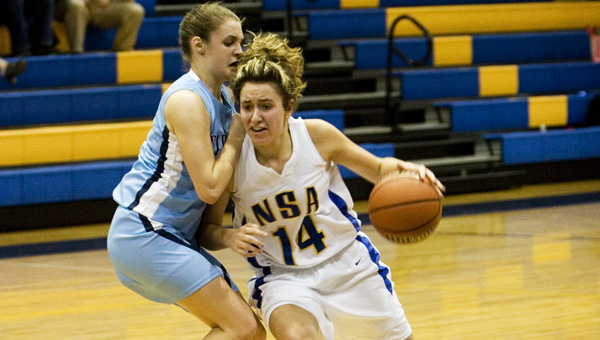 Nansemond-Suffolk junior guard Jessica Pieroni drives past the Tidewater Academy defense during the Lady Saints’ 49-30 victory at home on Tuesday night. Pieroni led her team with 24 points and also had seven rebounds.

“Very flat in the first half,” she said. “Defensively, we weren’t talking or communicating. We’ve had kind of a short week of practices because of exams, and we haven’t really gone real hard in practice, because we’ve only had an hour. We just were flat.”

With a man-to-man defensive scheme, NSA was allowing a strong scorer on Lady Warriors to rack up points.

“And then when we went to a zone defense, we kind of picked it up a little bit,” Aston said.

Holding a 25-18 lead at halftime, the Lady Saints took advantage of some steals on defense and strong free throw shooting from junior guard Jessica Pieroni to begin pulling away during the third quarter. Pieroni went 8-of-11 from the line and ended up with 24 points and seven rebounds.

As the lead grew to 20 points, Aston began pulling her starters from the game midway through the fourth quarter.

“We did rebound well on the offensive end, and we did run the fast break well, but other than that, pretty sloppy,” Aston said.

The Lady Saints (7-1, 0-0) will look to clean things up when they face Kellam on Friday night in the Nansemond-Suffolk Academy Girls’ Holiday Tournament.