A 7-year-old Suffolk resident recently donated 25 percent of his allowance for the year to the Suffolk Humane Society.

Conner Duncan, son of Corey and Jnel Duncan, gave $26 to the humane society. Conner said he wanted to give to the animals “because I like them.” 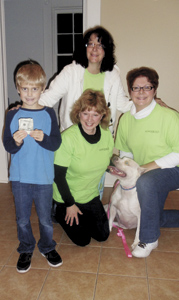 Conner Duncan, left, holds his $26 donation before handing it over to Suffolk Humane Society volunteers Becky Duman, Kay Hurley and Debbie Strickland. With them is Hope, a once-neglected pit bull mix who has now recovered in foster care and is one of the animals that will be helped with the donation.

Conner’s parents said they are trying to instill charitable values in Conner and his younger sibling. Conner was allowed to choose which charity he would support with his allowance.

“We explained to him what charity was, and we let him choose,” Jnel Duncan said. “There was no fight. It was just, ‘OK, we’ll do that.’”

Duncan said the family’s dog recently passed away, and Conner has always liked animals. She believes he chose the humane society over the other charities he could have supported because “it was the whole thought of doing something close to his heart.”

Corey Duncan said he takes his son with him when he donates to shelters and helps at the food bank. He hopes the example he and his wife are setting will pay dividends later.

Jnel Duncan said she hopes establishing the habit of giving early will help Conner be more charitable later on.

“I just feel like in today’s society, we give our kids too much,” she said. “Our kids were getting a little bit too much given to them all the time. We want to make sure they understand not everyone can do that. We need to make our kids aware that not everyone has the same household as everybody else.”