This award is based on a combination of points gained by winning ribbons in a variety of competitions offered at the conference. This was the Isle of Wight County Fair’s first chance to compete on the Large Fair level, which is for fairs who counted more than 30,000 guests. The fair hit its all-time record attendance this year with 33,732 guests counted. 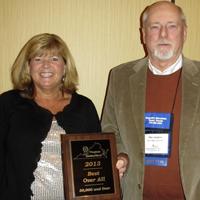 “Coincidentally, our theme this year at the convention was Ready, Set … Grow! The Isle of Wight County Fair is doing just that — growing at a record rate with admissions year after year and winning awards and setting the pace for 2013. This award was definitely gained by a team effort,” said Darlene Keyt, events/fair coordinator.

“Receiving this award is indeed a team award, but I can’t say enough of the efforts of Darlene Keyt, who spent so much time and energy putting it all together,” said Mike Stephens, Isle of Wight County Fair committee chairman. “She knew what it took, organized it all and got it set up at the conference. She deserves a lot of the credit for our success.”