No time for fear 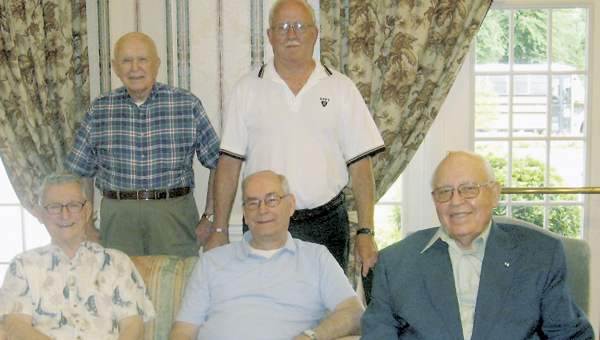 Two were pilots, two were on battleships in the Pacific, one worked on firing systems for bombs and missiles. Four were in the Navy, one was in the Army. Together their military service spanned almost 60 years.

Wes Hunt was 17 years old when he joined the Navy in 1943. Following boot camp in Maryland he was trained as a third class electrician and headed for California. There he and other crewmen boarded a banana boat, the SS Island Mail, that was being used for troop transport, and went to Pearl Harbor, where he was assigned to the USS Melvin, the ship on which he would spend the rest of his military service.

Hunt recalled that his ship went to practically every island in the Pacific, the strange-sounding names still coming to mind after almost 70 years. His ship took part in the second raid on Japan. “We strafed a lot of islands during that raid,” he said.

“Near Hawaii we picked up 40 crewmen from the USS Franklin who had had to abandon ship near Iwo Jima,” he noted. He also remembered how sparsely Hawaii was settled at that time and how there were no buildings obstructing the views of the mountains.

“You don’t get scared very much while you’re busy,” he said. “It’s when you’re not busy and you have time to think that you get scared.” He recalled being off the coast of the Philippines knowing the Japanese would be coming in about two days. “We didn’t know what was coming or when. During the period of action when you’re engaged in combat, you’re busy and don’t have time to be afraid. It’s before and after that it hits you.”

Bill Nix was another 17-year-old who enlisted in the Navy in 1943 while a student at the University of Alabama. Because he had some ROTC training, he became the company trainer. “I could yell pretty loud,” he said with a smile.

He was sent to radio school and trained in communications. His ship was sent to Key West, Fla., as part of a mine-sweeping group. This particular area was a rendezvous

point for ships and was a maze of mines, partly to keep the German U-boats in the Atlantic wondering which direction the ships would take.

Their ship had cables that extended out with cutters, and the goal was to snag one mine at a time. One day, two mines got snagged together and as they were carefully being hoisted out of the water they hit together. “Shrapnel went everywhere,” Bill recalled. “You’ve never seen so many little bits and pieces of metal.”

During his time in the Keys, a hurricane approached the island, so the squadron of 10 ships headed for the ocean. The winds were so strong they finally dropped anchor where they were, but even then they were still being pulled back toward land.

“It’s then I found out I would get seasick,” he said, “and I was sick for the next three years, except when I was busy working, and then it immediately went away.”

His ship was sent to the Pacific and he, too, went to many of the strange-sounding islands of that region. His ship participated in the last invasion of World War II, the invasion of Balikpapan, a seaport city on the coast of Borneo. There were 25 large oil tankers at refineries on the island. Preparation for the invasion began about June 24, and the invasion itself occurred on July 2-4. During the invasion all 25 oil tankers were exploded.

“About 30,000 men landed on the island during the invasion, and miraculously there were no deaths,” he remembered.

After he was discharged from the Navy in 1945, Bill enlisted in the Navy Reserves and was called up for the Korean conflict. He was a 1st class petty officer and air crewman by then, but because of changes in military aircraft, he was assigned as editor of a Navy newspaper with a circulation of more than 10,000.

In 1963 Al Nash joined the Army and was sent to Aberdeen Proving Grounds at Fort Mead, Maryland for training in the Signal Corp. Some time later, he and about 25 others were given a chance to participate in the Atomic Energy Commission. He accepted and was sent to New Jersey for radio and electronics training.

The screening and background checks before being accepted into the program were extremely detailed. He recalled with a smile, “My grandmother called my mother and asked what I’d gotten myself into to have all these government officials asking so many questions.”

He was sent to New Mexico, where he worked on firing systems for bombs and missiles. At White Sands Missile Range, he was involved in launching and firing test missiles.

“We went to New Mexico in the fall and stayed there until spring,” he said. “During the winter, it might be 80 degrees during the day but drop to below freezing at night.”

After his time in New Mexico, he became involved with testing and launching of Nike missiles.

Nash’s father served in atomic energy engineering during World War II at Oak Ridge National Laboratory. “I don’t think that had a bearing on my choosing to do this, but it’s interesting we both were in that field,” he noted.

John Sulfaro was another 17-year-old who joined the Navy in 1959, went to the US Naval Training Center in Bainbridge, Md., and then was selected to attend the Naval Academy in Annapolis. After graduating, he received flight training and in 1968 was stationed at Naval Air Station Oceana in Virginia Beach.

In 1969, he was sent to Vietnam not long after the North Koreans had taken the USS Pueblo. He spent time flying and supporting the troops in Korea, Vietnam and Thailand.

During the Cold War he spent time on the USS America and was deployed to the Mediterranean. He went to Monterey, Calif., studied for a master’s degree and then was deployed on a series of ships for most of the next three years. Electronics and communications were his areas of expertise, and he was involved with communications for the entire Atlantic Fleet.

Later in his 30-year career, Sulfaro was in charge of the flight deck and flight operations for the USS Kennedy. He later was involved in communications at bases from Iceland to Puerto Rico.

During his flying career, Sulfaro made 750 carrier landings, 250 of which were at night.

“I loved flying,” he said. “I stayed friends with guys in the maintenance department, so I always knew when there was a plane that needed test flying.”

“The people are the other part that made my career so memorable,” he added. “Whether I was training new pilots or whatever role I was in, that was one of the best parts.”

In 1950, Les Pomeroy became a Naval aviator. In 1962, his was the first squadron on the East Coast to train with jet planes. During two deployments to the Middle East over a two-and-a-half-year period, he was involved with developing procedures for jet landings and take-offs on ships.

During his varied career, Pomeroy was in a fighter squadron on the West Coast and was later assigned to the Naval War College in Newport, R.I. He went on to become an aide to the commander of the Defense Atomic Support Agency.

His responsibilities included writing speeches the commander delivered to many high-level agencies and military officials.

An assignment to London, England, dealing with weapons management involved planning the delivery of atomic weapons during wartime.

“My last assignment was as commanding officer at the Naval Air Rework Facility at Quonset Point, R.I.,” he said. “It was absolutely amazing to watch airplanes be completely disassembled, engine and all, and then be reassembled and sent back to the fleet.”

One memorable occasion of his 26-year career was being sent to the South Pacific to watch nuclear weapons tested.