From grief to joy

Picking up the pieces of a shattered life is a task most people have to do from time to time, particularly after a death in the family.

But for Terry Jones-Brady, she had to do it once. Then twice. Then three times. Then there were no more whole pieces left to break. 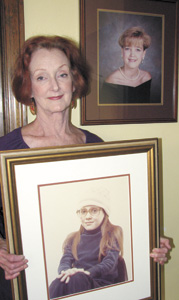 Terry Jones-Brady poses in her home with portraits of her daughters, Heather (in her hands) and Holly (on the wall). Both girls died of cystic fibrosis, and Jones-Brady has written a book about her journey through grief.

The Suffolk resident recounts the story in her book, “A Mosaic Heart: Reshaping the Shards of a Shattered Life.” Published about a year and a half ago, the book has won an honorable mention in the 2013 Great Southeast Book Festival in the biography/autobiography division and a silver medal in the 2012 Nautilus Book Awards in the grief category.

An excerpt of the book, before it was finished, also took the William Brenner Nonfiction Prize in the Hampton Roads Annual Writers’ Conference in 2010.

“It became a compulsion, really,” Jones-Brady said of her book. “I had to write this book.”

The author digs deep into her family’s traumatic past to recount every detail of the illnesses and deaths of her two daughters, Heather and Holly, who had cystic fibrosis. She recalls hearing the self-inflicted gunshot that killed her first husband, Tim Jones, after he could no longer bear life without the girls.

Jones-Brady has married again to Kevin Brady, whom she met at a crab-pickin’ at church. After describing the seemingly interminable sadness that surrounded her earlier life, she relates the joy of finding new love.

“I never let go of my belief that things can work out for the best, no matter what you go through,” she said, explaining how she came to write the book.

With Brady’s encouragement, Jones-Brady completed the book and sent the manuscript off to several publishers. They all rejected it, saying she didn’t have the credentials to be writing about grief.

However, she finally came across an independent publisher called Quartet Books that helped her.

The title of the book — and, as it turns out, its cover — came from Jones-Brady’s hobby of making mosaics that started around the same time she started working on the book.

“It occurred to me the mosaics I had made were a metaphor,” she said.

The cover of the book features a mosaic she made with a playful child among a sea of stars.

Jones-Brady said she hopes the book will be helpful to others.

“My desire is it would be useful to other parents,” she said. “We live in a world that’s chock-full of grief, unfortunately.”

More information about the book and where to purchase it can be found at www.terryjones-brady.com. A portion of proceeds from the book benefits the Cystic Fibrosis Foundation.