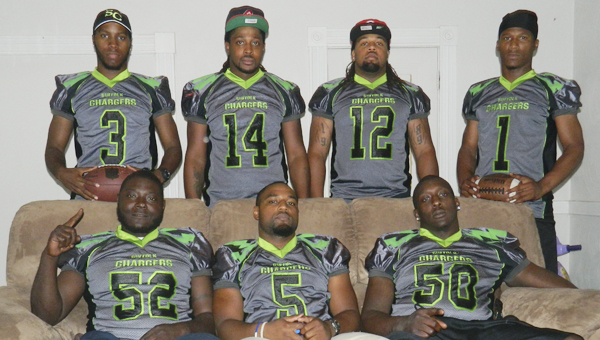 The successful inaugural season of Suffolk’s local semi-professional football team, the Chargers, will be reflected today as it sends eight players to the Atlantic Coast Football Alliance all-star game in Annapolis, Md. to play before a scout from the New York Jets.

“You can’t take nothing from them as far as being a small team, they all played with heart all season, so they all earned it,” he said.

Aside from the key factor of game performance, Waddler explained his criteria for what makes an all-star.

“Dedication, being at practice, working hard, keeping the team together during the game, even when you’re down, being positive, being a team player, everybody knowing their role,” he said.

He also noted that of the eight players named, “every last one of them can play more than one position, so that was my main focus on them.”

Chargers owner Angela Harper was overcome with gratitude to these players who took full advantage of the opportunity she gave them to return to the gridiron and possibly move on to college or professional play. That team would not have gotten very far without dedicated men, such as Charlie Keys, who drove from Richmond each day to come to practice in Suffolk or Portsmouth.

“They promised me they were going to give me their all, they told me, they said, ‘We’re going to try to get you to the championship and get you a ring,’” she said.

“They’re the best thing that really ever happened, to me, they are,” she said.

Harper was informed that a scout for the National Football League’s New York Jets would be present at the game Saturday afternoon. She hopes the all-stars will shine on this pivotal stage and make it to the next level.

Santonyo Jones said being selected for the team means a lot.

“There’s a lot of guys who probably were nominated for it, but for them to pick the handful that they picked, that means we had to be standing out, doing something good on the field.”

For Harper’s son, Andre, it had a special significance.

“It actually means a lot because this is actually my first time ever making an all-star team,” he said.

Daryl Green, 32, said he feels like he is a big brother to the team, and is enjoying playing while helping the younger players develop their skills. His goal at the all-star game is simple: “Just show off for my Chargers, man.”

Keys hopes the game this weekend will lead to growth for the Chargers as they tackle the fall season.

“I think being that we’re going to the all-star game and once this gets in the newspaper, it’ll bring more people out next time,” he said.

On the mind of many of the Chargers’ players is the opportunity to impress the Jets scout.

“I just push myself and everything to try to get better and knowing that there’s going to be some people out there looking at me, that’s what I’ve been waiting for, so I’ve got to go out there and do my best,” Jones said.

The all-star game will pit the stars of the ACFA’s National and American Conferences against each other and takes place today at 2 p.m.