‘Pieces of the puzzle fell together’ 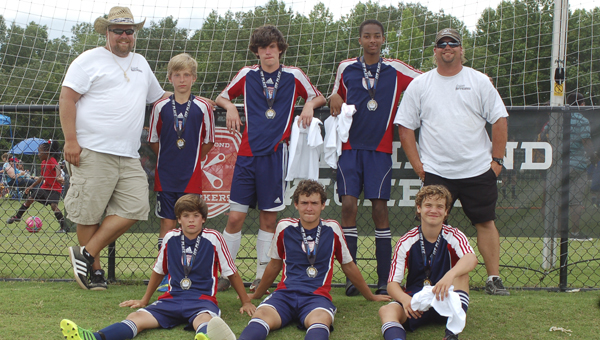 The SYAA Hurricanes sport their medals on Saturday after having played what coach Chris Pauley called the best game he had ever seen them play. They defeated FC Milan 9-0 to win the joint U-14 and U-15 gold division of the 3v3 Live tournament at Ukrop Park in Richmond. Front row, from left: Cody Faust, Daniel Tallarico and Zachary Pauley; back row, from left: Chris Huhtala, Ryan Huhtala, Justin Fransee, Bakari Jenkins and coach Chris Pauley. (Stacy Pauley photo)

The Suffolk Youth Athletic Association sent a mixed team of 3v3 soccer veterans and novices to compete in the 3v3 Live tournament in Richmond this past weekend, but the team’s coaches witnessed a remarkable refinement of their squad’s abilities.

The Hurricanes went 2-1 in the combined U-14 and U-15 gold division, then advanced through the semifinals to the championship, facing the team that gave them the single loss, Football Club Milan.

Milan had defeated the Hurricanes 5-4 only two hours earlier, but the title game only shared one similarity with that contest — the number of goals scored. 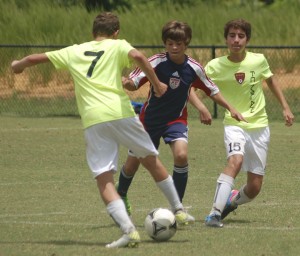 Cody Faust of the SYAA Hurricanes looks to deny a member of FC Milan on Saturday during the 3v3 Live tournament at Ukrop Park in Richmond. The Hurricanes won the joint U-14 and U-15 gold division. (Stacy Pauley photo)

“(The Hurricanes) must have really wanted that championship game because they beat that team 9-0,” coach Stacy Pauley said.

“I think we just wanted it more,” Hurricanes player Daniel Tallarico said. “I think it was a pride thing.”

Pauley shared that her husband, Chris, who coaches the team, as well, said that it was “the best game he had ever seen them play.”

The Pauleys brought six players to compete on Saturday at Ukrop Park in the event hosted by the Richmond Strikers. The three 3v3 players who have played the format for two years included Cody Faust, Zachary Pauley and Tallarico. Justin Fransee, Ryan Huhtala and Bakari Jenkins played well, despite lacking similar field time.

They did not lack for opportunities to play on Saturday as the Hurricanes navigated a schedule with games every hour on the half hour, starting at 9:30 a.m. and ending with the championship at 1:30 p.m. Each game had two 10-minute halves.

There were four teams in the Hurricanes division and they defeated two of them to start with, 8-3 and 5-1. Then FC Milan dealt them the loss in the 11:30 a.m. game.

Pauley noted a weakness that the Hurricanes exhibited, which was eliminated later. Though there are no goalkeepers who can touch the ball with their hands, each team uses one player as an anchor to stand in front of the goal area. This player still needs the support of the other two, however.

“When FC Milan scored in that game, it was because the other two were not coming back to help,” Pauley said.

“All I can tell you is I definitely wanted to win that game and try to stop them from scoring as much as possible,” Zachary Pauley said.

Stacy Pauley said that the team functioned as a moving triangle on the field, reading each other and talking.

“All the parents were just in awe that they played so well,” Pauley said.

Tallarico described what was different about his performance in the title game compared to the earlier meeting with FC Milan.

“My passes were a lot cleaner, they were good, solid passes,” he said. “We didn’t have many turnovers that game.”

“I think we scored most of our goals off of counterattacks,” he said.

“It was like all of a sudden all the pieces of the puzzle fell together,” Stacy Pauley said.

Tallarico contributed a few goals in the championship, and Zachary Pauley led the Hurricanes on the day by scoring 12 of the team’s 32 goals overall.

SYAA will take three teams, including the Hurricanes, this coming weekend to Washington, D.C., where they will get to play in a 3v3 tourney on the practice field of the Major League Soccer team, D.C. United. Then, they will get to attend United’s game that evening at Robert F. Kennedy Memorial Stadium and meet the players on the team.